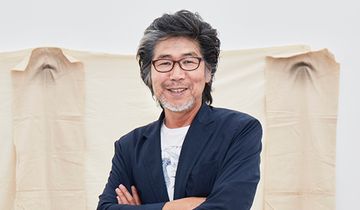 Korean artist Kim Yong-Ik (김용익) has led a diverse career, from his 'Plane Object' series from the 1970s, geometric compositions from the 1980s, polka dot paintings from the 1990s, and appropriations of his earlier works in the recent decades. Although Kim has witnessed the emergence of various art movements in Korea firsthand, including Dansaekhwa and the Minjung art movement, also known as 'People's Art', he has remained independent, instead committing his work to a constant self-critique and questioning of existing art institutions.

Kim first garnered attention with his 'Plane Object' series in the mid-1970s, a series of fabric works he conceived while still an undergraduate student at Seoul's prestigious Hongik University. Created by airbrushing large pieces of cloth stretched or hung on the walls, Plane Object transforms the flat surface of painting into a three-dimensional object. Kim also became known as a student to Park Seo-Bo, a leading figure of Dansaekhwa or monochrome painting movement in Korea.

Kim's career in the 1980s coincided with a turbulent chapter in modern Korean history. In 1979, President Park Chung-hee was assassinated and his military dictatorship was replaced by that of Chun Doo-hwan, who brutally oppressed political dissents and regulated the press. Two years later, Kim was invited to participate in the 1st Young Artists Exhibition at the National Museum of Contemporary Art, Seoul, where he made an exception to his generally apolitical stance: instead of showing 'Plane Object' as planned, the artist displayed his work in cardboard shipping crates with labels to inform the viewer of their content. While this untitled work paid an homage to Duchamp, whom Kim admires, it was also interpreted by some critics as a protest against government censorship.

The following two decades witnessed an emergence of various art movements in Korea, notably the Minjung art movement, also known as 'People's Art', of the 1980s. Overtly political and populist, the movement opposed Western modernism and advocated for a return to traditional Korean culture for inspiration. Refusing to conform to either modernism or Minjung art, Kim maintained a critical perspective on both and utilised painting as a tool to interrogate existing decrees of contemporary art. During this period, he focused on formalist concerns, experimenting with sharp-edged geometric compositions.

In the early 1990s, Kim began his iconic polka dot series, which consists of paintings that typically feature an arrangement of circles. Although the overall composition of Kim's polka dot paintings may recall the monochrome paintings of his teacher Park Seo-Bo or Kwon Young-Woo, the mechanical quality of his dots differ from the others' in the visibility of the artist's hand. Kim's dots are also juxtaposed with material imperfections such as dirt, scribbles, drips of paint and doodles: in Apocalypse of Modernism #13 (2016), the otherwise neat grid of dots reminiscent of early modernist paintings is disrupted by paint that the artist has intentionally spread to stain the canvas.

Ocula Conversation Kim Yong-Ik By Elliat Albrecht, Hong Kong I never presented the polka dots as they were, in a well-aligned manner. I always created a little crack or blemish. That's also part of my personality. I was never outspokenly resistant to modernism, but I always like to create little puns here and there.

View More Related Video & Audio Installation video of Kim Yong-Ik at Kukje Gallery 8 December 2016, Kukje Gallery Kim Yong-Ik's practice perfectly embodies the vital importance of post-Dansaekhwa artists in Korea, and the exhibition will present approximately thirty new works, produced within the last two years, that present a clear reframing of his practices by reappropriating past ideas. While new, the works link directly to Kim's long career and his...