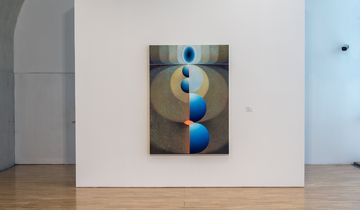 Exploring sexual and autobiographical themes, her radiant and pulsating images call upon spiritual iconography and geometry to create impressions of different bodily forms.

Born in Woodland, California in 1982, Hollowell studied fine art at the University of California in Santa Barbara, graduating with a BFA in 2005. Following a Salem Art Works Summer Residency (2007), and Virginia Museum of Fine Arts Fellowship (2011), she then completed an MFA at Virginia Commonwealth University in Richmond.

Autobiography has been a key part of Hollowell's practice since her explicitly sexual figurative works made in grad school. In these, she explored her own relationship in terms of bodily experience. Faced with the challenge of conveying emotional experiences relating to her body—period pain and abortion among them—the artist shifted her stylistic approach.

Hollowell's more recent works, such as her 'Point of Entry' (2017) and 'Plumb Line' (2018—2019) series, use an abstract language of geometric shapes to portray the physical and emotional experience of conceiving and giving birth to her child.

The artist's abstract language, defined by ethereal lighting and a vibrant colour palette, draws upon the characteristics of tantric art as seen in the works of Santosh and the early 20th-century Transcendental Painting Group, as well as feminist abstract artist Georgia O'Keeffe.

Making sketches of the forms she seeks to present, Hollowell simplifies these down to a series of shapes and volumetric forms arranged symmetrically. Sacred shapes like the mandorla, ogee, and lingam, are repeated throughout the artist's works alongside ovular forms.

Although appearing crisp and flat from a full-frontal perspective, upon closer inspection, the artist's works have become more and more sculptural. New works shown in Loie Hollowell's exhibition at Pace Gallery in London, Dominant / Recessive (2018), consisted largely of multi-layered canvases with advancing and receding planes, curved and sharp-edged surfaces.

As a part of her process, Hollowell sculpts the underlying surface of her paintings with sawdust and high-density foam on linen-covered poplar panels, then coats these with gesso to create an even, white surface. She further adds surface texture by applying her vibrant oil and acrylic palettes with a combination of fine brushwork and sponges.

Working on an uneven sculptural surface, Hollowell reconciles real and illusory light within her works. Open to interpretation, Hollowell's works can be interpreted as two-dimensional and sculptural; figurative and abstract.

While a handful of Manhattan galleries have flocked south where Tribeca is emerging as a new cultural destination, it's the international blue-chips who are banking on Chelsea's staying power. The rec

Be among the first to know when new artworks and exhibitions by Loie Hollowell are added to Ocula.
Sign Up Login