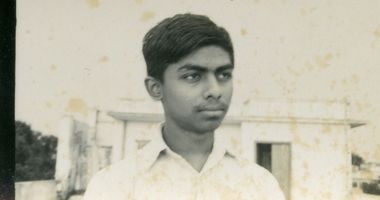 Naeem Mohaiemen's film projects revolve around modern history, with a particular focus on South Asia and the 1970s. Merging personal and national histories, Mohaiemen explores the gaps in historical memory.

Mohaiemen's concern with the 1970s stems from growing up in Bangladesh during the period, a time defined by a series of coups détat and political unrest. In an interview with Tate in 2018, the artist said that he was drawn to the era's aura of optimism due to the radical leftist movements that prevailed at the time but ultimately ended up as failures in Bangladesh and elsewhere. Working with both his personal recollection of historical events and official records, Mohaiemen often weaves differing narratives drawn from various archives to reconstruct the past in his work.

The artist's four-part film series 'The Young Man Was' (2006–2016) focuses on pivotal moments of the unravelling of various leftist movements of the 1970s. United Red Army (2011)—the first film in the series—pieces together footage from Japanese television sources and audio tracks from the Bangladesh Air Force, among others, to trace the hijacking of Japanese Airlines Flight 472 in 1977. The hijackers—members of the Japanese Red Army—had not known that leftists in Bangladesh had been weakened by a military coup two years before and that their actions would not be supported until they forced the Tokyo-bound plane to land at Dhaka International Airport. Inserted in the film is the scene of a young boy sitting before the television—a reference to the artist who was eight at the time and who then only wanted to watch his favourite television show instead of the hostage crisis.

Misrecognition plays a central role throughout the rest of the 'The Young Man' series. In Afsan's Long Day (2014), Mohaiemen takes Bangladesh leftist intellectual Afsan Chowdhury's journal entries as a tool to revisit the day Chowdhury was almost executed for owning Marxist books. Similarly, the 2015 film Last Man in Dhaka Central, which premiered at the 56th Venice Biennale, describes the imprisonment in Bangladesh of Dutch journalist Peters Custers for allegedly participating in a Maoist group that staged a failed military coup in 1975. The final film in the series, Abu Ammar is Coming (2016), examines a photograph of five men who were supposedly Bangladeshi and affiliated with the Palestinian Liberation Organisation in the early 1980s, questioning how contemporary relations between the involved nations might be reshaped.

In 2017 at documenta 14, Mohaiemen presented two films that broadened his practice of reflecting on history from multiple perspectives. The three-channel video Two Meetings and a Funeral (2017) reconsiders the Non-Aligned Movement conference in Algeria in 1973 and the Organisation of Islamic Countries meeting in Lahore in 1974—two of the historical events that marked Bangladesh's turn from socialism to Islamism. Tripoli Cancelled (2017) is the artist's first fiction, albeit based on a real-life anecdote in which his father was detained at Athens' Ellinikon Airport in the 1970s after losing his passport. Filmed at the same airport—which has been abandoned since 2001 but has recently acted as a site for Syrian refugees—the work follows a lone man as he spends his days writing letters to his wife and playing with flight gear while waiting—indefinitely—for his return home. Tripoli Cancelled is at once about loneliness, contemporary issues of forced displacement and the refugee crisis.

Between 2001 and 2006, Mohaiemen was a member of Visible Collective—an organisation of artists, activists and lawyers concerned with the ramifications of state security paranoia on the marginalised underclass in the aftermath of 9/11. He also joined Gulf Labour Coalition, founded in 2011 to advocate for improved living and working conditions of migrant workers building museums on Saadiyat Island in Abu Dhabi.

Ocula Conversation Naeem Mohaiemen on the Afterlife of Care and Memory By Katarina Pierre, Umeå

Naeem Mohaiemen unpacks his most recent film Jole Dobe Na (Those Who Do Not Drown).

Opening events for the digital exhibition were postponed due to ongoing conflict between Armenian and Azerbaijani forces.

To reduce an entire context into a frame for an exhibition that doubles as a world stage is an inherently violent act, even when enacted with good intentions.

Naeem Mohaiemen, a filmmaker and writer of Bangladeshi extraction, was born in London in 1969, graduated from Oberlin College in Ohio, and is currently a PhD candidate in anthropology at Columbia Univ

Read More
Related Press Naeem Mohaiemen: ‘I wanted to take the documentary form and jar it’ 21 January 2019, The Guardian

Naeem Mohaiemen was born in London in 1969 to Bengali parents and grew up in newly independent Bangladesh. As a visual artist and writer he returns often to the political struggles of the 1970s and th

Nineteen years after I first watched it, two scenes from Sofia Coppola's The Virgin Suicides (1999) have stayed with me. An early sequence, in which a teenager explains her death urges to a bewilder

It is the biggest and most controversial competition in the art world - often challenging what can be defined as art. This year, the Turner Prize is all about the creator rather than the creation an

Naeem Mohaiemen works with film, installation and essays. His practice investigates transnational socialist politics after the Second World War. This period was framed by decolonisation and the erasin

Be among the first to know when new artworks and exhibitions by Naeem Mohaiemen are added to Ocula.
Sign UpLogin