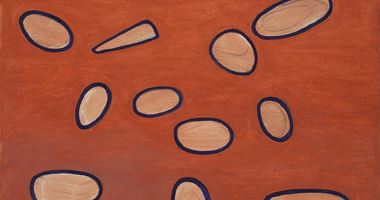 For nearly fifty years, Raoul De Keyser (1930–2012) created subtly evocative paintings and works on paper which appear at once straightforward and cryptic, abstract and figurative. Composed of basic but indefinable shapes and marks, his works often invoke spatial and figural illusions, though they remain elusive of any descriptive narrative. Despite—or precisely because of—their sparse gesturing, De Keyser’s works convey a grandeur that inspires prolonged contemplation. Individually as well as collectively, his works revolve around the activity of painting, but also move beyond its physical means to become more than the sum of their parts. Their apparent simplicity belies a lengthy gestation period, which is guided largely by intuition, rather than by following a pre-existing plan.

Since the mid-1960s, the artist's work has been the subject of several solo exhibitions at prominent institutions. In 2000, a large-scale retrospective was presented at The Royal Hibernian Academy, Dublin, which traveled to the Goldie Paley Gallery, Moore College of Art and Design, Philadelphia and The Renaissance Society  at the University of Chicago. A major survey of the artist’s paintings traveled extensively from 2004 and 2005 to the Whitechapel Gallery, London; Musée de Rochechouart, France; De Pont Museum for Contemporary Art, Tilburg, The Netherlands; Museu Serralves, Porto, Portugal; and the Kunstmuseum St. Gallen, Switzerland.

They are small things, clustered in an order that is like an interrupted thought. Hung just as they were in his studio, Raoul De Keyser’s last paintings now occupy a wall at David Zwirner gallery in London. De Keyser died in 2012 at the age of 82. A few marks, some strange bent shapes; some are barely paintings at all. One has a small...

Sign up to be notified when new artworks and exhibitions by Raoul De Keyser are added to Ocula.
Sign UpLogin