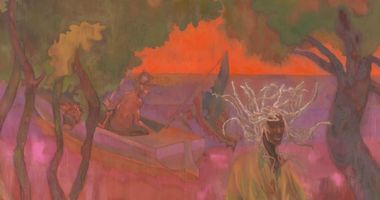 Sedrick Chisom's art primarily employs paint, manipulating it in such ways as spray-painting, dripping, scraping, and staining to create ambiguous spaces that merge into one another. His large-scale paintings are often presented unstretched, hanging from walls like tapestries or, as Eve Wood writes in Medium, skins.

Narratives revolving around an apocalyptic world were at the core of his solo exhibitions When the Night Air Stirs (2019) at Matthew Brown, Los Angeles, and Westward Shrinking Hours, which was presented by London's Pilar Corrias as part of Condo 2020. In the world that Chisom depicts, people of colour have ventured into the universe while white people remain on earth. The latter discovers a new humankind with animal-like and grotesque physical features that turn out to be aides for survival.

Through the introduction of a new human species, Chisom considers the trope of whiteness in fiction as the embodiment of civilisation and order; the protagonist against the unknown Other. In his artist's statement for Fountainhead Fellowship in Painting and Drawing in 2019, he writes that 'there are deliberately very few black bodies involved in this narrative', as a way of focusing the consequences of racism directly on white bodies.

Chisom also often uses long titles that help describe the scenes within his paintings. The charcoal drawing, The Low Frequency Shade Broadcasted By A Donestre Towards The Story of The Altrightland in The Age of Monster (2019), for example, shows an animal-headed human-hybrid in the midst of a dark landscape, while the painting An Early Episode of The Empire's Preemptive Counterattack on The Monstrous Race in the Savage South (2019) focuses on two figures seemingly embroiled in battle.

There exists a suggestion of suspense in many of Chisom's paintings, in which figures appear ghost-like and buoyant. Examples can be found in The Nighttime Encounter of the First Miasma (2019), where the two figures' bodies gradually turn from dark to translucent white, or in "...In The Cave Where You Put Your Monsters To Death" (2018), in which a topless figure raises his two hands as if in defense against a hovering mask in the air.

Chisom received a BFA from the Copper Union, New York, in 2016, and an MFA from Rutgers University, New Jersey, in 2018.

Sign up to be notified when new artworks and exhibitions by Sedrick Chisom are added to Ocula.
Sign Up Login