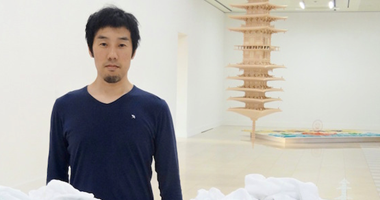 Takahiro Iwasaki sculpts miniature landscapes from unexpected materials. Bath towels, electrical tape, toothbrushes and human hair transform from the mundane to the extraordinary. Drawing on Japan's industrial history, Iwasaki recreates factories, ferris wheels and radio towers that present a snapshot of a bygone era. Far from being glamourous monuments, Iwasaki's sculptures are melancholy, recalling the late trauma of warfare, and more recent natural disasters in Japan that have left a psychological imapact on contemporary audiences.

Born in Hiroshima, Iwasaki recieved an MFA from Edinburgh College of Art, and a Ph.D. from Hiroshima City University. In 2010, his Structural Phase Transition Model was exhibited at Art 41 Basel. Iwasaki has also exhibited extensively in Scotland, Germany, China and Japan. His works are held in public collection internationally including at the Yokohama Museum of Art. the Mori Art Museum, the Royal Infirmary of Edinburgh and the Queensland Art Gallery in Brisbane.

Takahiro Iwasaki is a leading figure in Japan’s new generation of artists. Born in Hiroshima, he received an MFA from Edinburgh College of Art, and a Ph.D. from Hiroshima

The Japanese pavilion at the 57th Venice Art Biennale presents a solo exhibition of artist Takahiro Iwasaki (b. 1975, Hiroshima). Iwasaki is renowned for its works, though which he transforms apparent

There is no escaping life's big themes—the migration crisis, identity politics, populism, an uncertain future—at this year's Venice Biennale. This, the 57th edition, is curated by the Pompidou Centr

Read More
Related Press 11 national pavilions and exhibition to see at the 57th Venice Biennale in 2017 23 May 2017, Art Radar Journal

Sign up to be notified when new artworks and exhibitions by Takahiro Iwasaki are added to Ocula.
Sign UpLogin