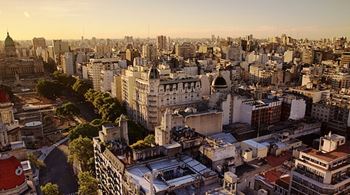 A city widely recognised for its international influence within and without, Buenos Aires is also home to many great local artists and art institutions, particularly contemporary art venues on historical sites.

Fundación PROA is a well-known private art centre focused on art from the 20th and 21st centuries. Founded in 1996, Fundación PROA underwent a remodelling project in 2008 that included a new transparent facade in order to communicate 'experiences from the inside to the neighbourhood', according to the centre's website. It frequently develops programming with an emphasis on educational and exchange programmes with other cultural institutions. In addition to the three-storey building's four exhibition halls, there is a multimedia auditorium, a library, and a café. The centre has held exhibitions on Argentinian abstract art; American Conceptual and Minimalist art; and the work of Jenny Holzer, Ai Weiwei, and Louise Bourgeois, amongst others.

The Museos de la Universidad Nacional de Tres de Febrero's Centro de Arte Contemporáneo is housed in the former Hotel of Immigrants of Buenos Aires alongside the Museum of Immigration. The Hotel was established to accommodate the massive influx of immigrants arriving in Argentina from 1906 to 1953, and was declared a National Historic Landmark in 1990. A restoration process was carried out and the centre opened its doors in 2012. Given the rich history of the former hotel, the centre aligns its mission with the location's former values, as a platform for participation, dialogue, and action through contemporary art and culture.

The CCK is the largest cultural centre in Latin America, and is housed in the former central post office of Buenos Aires. The post office operated from 1928 until 2002, and the CCK opened in its place in 2015. The building itself is a must-see, filled with marble and stained glass. The centre is named after Argentina's late President Néstor Kirchner, who was a strong proponent of the arts. In addition to its visual art, the centre is known for its extensive music programming. An alternative art venue also in a historic building is the the Centro Cultural Recoleta (CCR), housed in what was a convent of the Recoleto monks from 1732. The CCR is a government-run art centre and multidisciplinary space, dedicated to the art of Argentina and, in particular, emerging artists. It was opened in 1980 and in it artists freely pursued ideas that may not necessarily align with dominant political ideologies. Rich in cultural history, the centre is still known for its commitment to experimental art and art forms.

Buenos Aires is also home to a rich and diverse range of galleries such as Gachi Prieto, HILO, Galería Nora Fisch, Galería Mar Dulce, and emerging and alternative art spaces such as Papel Moneda. As for art fairs, Buenos Aires is widely known for its arteBA—Argentina's largest art fair. Most recently, the city has been a part of the Art Basel Cities initiative due to its flourishing art scene.