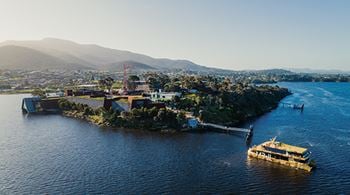 Located on the southeast side of Tasmania, on the western bank of the River Derwent, Hobart is the state's capital, with a population of just under a quarter of a million. For international contemporary art tourists, it is the Australian city you pass through to check out the Museum of Old and New Art (Mona), the collector David Walsh's extraordinary museum of both contemporary and ancient art, accessible via ferry from Hobart's Brooke Street Pier.

With most of the building located underground, Mona is the largest privately owned museum in the Southern Hemisphere. It is known for its forthrightness in dealing with the provocative themes of sex and death, with ancient Greek, Roman, and Egyptian holdings as well as modern pieces. Distinctive in its subterranean ambience, this very popular institution is also unique for the fact that it was initially funded from Walsh's profits, which he made from being a professional gambler.

Located in Dunn Place, the Tasmanian Museum and Art Gallery has a steady programme of historical and contemporary art shows, tuned in to the zeitgeist of our time and accordingly sensitive to the region's history of colonial brutality toward indigenous peoples and transported convicts. Aboriginal artists like Julie Gough and Michael Cook have been featured in the museum's recent contemporary art exhibitions.

Contemporary Art Tasmania is an art space that was set up in the early 1980s to promote leading exponents of contemporary Tasmanian art. It is supported by the Visual Arts Board of the Australian Council, Arts Tasmania, and the Visual Arts and Craft Strategy. It grew initially out of Chameleon, a significant local art organisation. It now features an exciting programme of carefully selected shows involving Tasmanian, Australian, and international participants.

Founded by New Zealander Dick Bett in the mid-1980s, Bett Gallery represents a wide range of seasoned Australian artists such as Imants Tillers, Tim Burns, and Pat Brassington. Plimsoll Gallery was primarily founded for adventurously advanced work made by students of the University of Tasmania's School of Creative Arts. None of the work is available for sale through the institution.

If you are fortunate enough to be visiting downtown Hobart over the month of June, be sure to take advantage of the yearly Dark Mofo winter arts festival. Organised by Mona, the festival features the sinister, monstrous, disturbing, and fearfully grotesque. Artists and performers who recently participated in the programme include Mike Parr, William Mortensen, Blixa Bargeld, Paul McCarthy, and Tony Oursler.