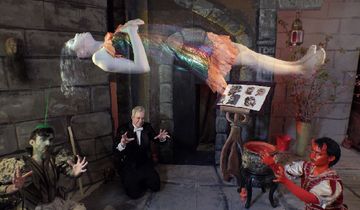 American artist Tony Oursler has been compared to a circus showman. It is not difficult to imagine Oursler as a ringleader of an orphic recital; known for his twisted and ethereal combinations of sculpture, film and technology, his practice has incorporated projections, smoke, puppets, video screens and automatons to examine themes such as UFOs, magic, séances, pseudoscience, camera obscura and mass media. In his Manhattan studio is a collection of over 15,000 objects, publications and ephemera related to the paranormal and uncanny—an accumulation that has fed his hallucinogenic practice. Over the past 40 years, Oursler has become recognised for his inventive works exploring the intersection of technology and the occult.

Tony Oursler earned a BFA from the California Institute of the Arts in the late 1970s, where John Baldessari and Laurie Anderson were teachers and his peers included artists Mike Kelley, Jim Shaw, Sue Williams and Stephen Prina. He returned to New York after graduating, and his first handmade videos incorporated intricate sets, soundtracks and DIY special effects—works for which he is now considered a pioneer of video art. Formative installations from the 1980s experimented with distorting video images with reflections in mirrors, water and glass in dark rooms. Tony Oursler's early popularity was in part due to the fact he was picked up by Electronic Arts Intermix, a non-profit resource for video and media art. In the late 1980s, Oursler began incorporating social critiques into his works, touching on political and cultural violence, mass media and alienation. In the 1990s, he started to project disembodied facial features onto bizarre surfaces including fabric and smoke. The works were accompanied by layered recordings of voices reciting poetic, irreverent and sometimes nonsensical phrases written by Oursler–his 'sound collage' technique developed into a mainstay of his practice. His works over the next two decades experimented with the possibilities of video sculpture and psychodramatic technological theatre, all the while pointing at the ephemerality of the virtual image.

Tony Oursler's artwork has been exhibited extensively in solo and group exhibitions around the world including at the Centre Pompidou in Paris, Tate Liverpool, documenta 8 in Kassel and The Museum of Contemporary Art, Los Angeles. In 2016, Tony Oursler's Imponderable (2015–16) was exhibited at The Museum of Modern Art, New York; the feature-length film told an alternate history of technology by delving into the artist's own archive of objects related to the paranormal. Oursler called the work a '5-D' film as an array of sensory effects such as aromas, vibrations and a 19th-century phantasmagorical device made the experience dramatically immersive.

Harking back to the bodiless facial features of the 1990s, more recently Tony Oursler's art (as seen in his 2016 exhibition PriV%te at Lehmann Maupin) has stemmed from his interest in the pervasiveness of facial recognition technology. LCD screens or iPads are embedded within large, aluminium head-shaped structures and show ultra high-definition moving eyes and mouths accompanied by sound collages, making the actors within seem trapped between technology and real life. Algorithmic points are plotted around the faces, as if recording them in real time. 'Portraiture today', Oursler has said, 'is no longer a chiaroscuro painting or photographic mug shot.' Instead, according to Tony Oursler, portraiture is comprised of the ubiquity of data collected of our beings without our express knowledge or consent: 'It's changed the way we think about ourselves'.

Ocula Photolog Sydney Contemporary 2022: In Photos Australian art fair Sydney Contemporary returns to Carriageworks from 8–11 September. Ocula's Hazel Ellis was on the ground to capture all the art, the energy, and the atmosphere on the fair's opening day.

View More Ocula News Tony Oursler Retrospective to Open at Last in Kaohsiung Kaohsiung, 15 January 2021 Some of the artist's works wouldn't be out of place among David Lynch's home videos.

Read More Ocula Conversation Rachel Lehmann By Anna Dickie, Hong Kong It is all about growing with an artist. A gallery has to grow at least as fast as the artist; but not just one artist - all of the artists that it works with.