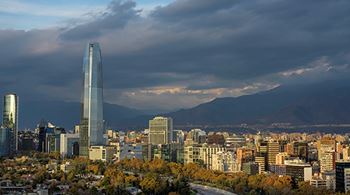 As the capital of Chile, Santiago is celebrated for its natural beauty, and the city's Neoclassical architectural structures. With the emergence of many galleries and museums—both newer and historical—art has also become a good reason for visiting the city too.

The country of Chile itself is well-known for artists of all kinds, including Mario Navarro, Eugenio Dittborn, and Gonzalo Díaz. However, it is primarily known as the home of famed Chilean poet Pablo Neruda, who can be said to be synonymous with the culture of the country. La Chascona is a house owned by the celebrated poet in Santiago. While not the city's primary attraction, the home—named after Neruda's lover—does feature international and Chilean artworks that are worth visiting. For more arts-centred spaces outside of museums, visit galleries like Galería XS, Galería AFA, Galería Patricia Ready, and Galería Isabel Aninat.

The Chilean National Museum of Fine Arts is a great museum to begin a visit to Santiago with. It was originally founded as the National Paintings Museum in 1880 and its first director was painter Juan Mochi. The Palace of Fine Arts, which houses the Museum, is already a major reason to visit. It was designed by the Chilean-French architect Emile Jéquier in 1910 with a combination of Neoclassical, Baroque, and Art Nouveau features, and includes reliefs by Guillermo Córdova, Antoni Coll y Pi, and others. The collection itself is equally if not more impressive, with more than 5,000 pieces.

Fifteen minutes away by public transport is the Santiago Museum of Contemporary Art, which is run by the University of Chile Faculty of Arts and was established in 1947. Its collection is comprised of over 2,000 items and focuses on modern and contemporary arts from the late 19th century on, including work by Matilde Pérez, José Balmes, and Isamu Noguchi, amongst others. The Museo de Artes Visuales (MAVI) is equally dedicated to Chilean contemporary art. The MAVI champions younger generations of artists and accessibility through its MAVI / Minera Escondida Prize for Contemporary Young Art. Past exhibitions have featured the works of Ernesto Banderas, José Basso, Andrés Durán, Pancha Núñez, Francisco Smythe, and María Edwards.

For less contemporary works, visit the Museo Chileno de Arte Precolombino. Opened in 1981, the museum is dedicated to conserving and studying the histories and arts of pre-Columbian peoples of Central and South America in particular. The collection, drawing originally from the founder Sergio Larraín García-Moreno's own private collection, includes statues, masks, ceramics, pottery, textiles, and more.