TALLER BLOC is a studio oriented toward the production, training, and overall exhibition of visual arts. It was founded as the result of a series of conversations among a group of friends that touched on the analysis of their own artistic work, which led to the discussion of different themes regarding the relationship between the arts and education, politics, the economy, and other topics.

During late 2009, with the purpose of founding BLOC, a group of artists, including Catalina Bauer, Rodrigo Canala, Rodrigo Galecio, Gerardo Pulido, and Tomás Rivas, started a studio on the premises of an old bakery (which today is called Bakery Studio) located in Providencia, Santiago. The establishment of the studio allowed artists to produce their own work, while guiding the production of work of fellow students. Sharing a common space, in which each founding member could develop and produce his or her own artistic work, was an ideal that they had dreamed about for a long time. Today, in an effort to maintain the idea of a common space for artistic production, BLOC is open to anybody with an interest in the artistic creative process. 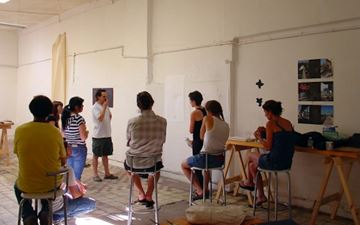