About Museum of Contemporary Art Australia

Located on one of the world’s most spectacular sites on the edge of Sydney Harbour, the Museum of Contemporary Art opened its doors to the public in November 1991. Established through a bequest by Australian expatriate artist John Power (1881-1943), who left his personal fortune to the University of Sydney to inform and educate Australians about international contemporary visual art, the MCA is dedicated to exhibiting, collecting and interpreting contemporary art.

The vision of the founding Director Leon Paroissien and Chief Curator Bernice Murphy was manifest from its earliest years – a commitment to innovative programming with ground-breaking exhibitions of contemporary art from Australia, the Asia Pacific region and around the world.

In 1998, the first phase of expansion began when the Museum had access to the whole building and created galleries for solo exhibitions by Australian artists.

A strong emphasis on making the MCA a museum that engages artists with audiences led to a program of significant solo shows by Australian and international artists as well as thematic and group exhibitions. The MCA is a major partner of the Biennale of Sydney. Attendances increased to over 580,000 in 2010, leading to the need for further expansion.

In March 2012, following extensive redevelopment a significantly expanded museum was unveiled to the public. Architect Sam Marshall in conjunction with the Governments Architect's Office has created a striking building that responds to its unique location bringing together the old and new and creating a context for engaging artists with audiences for the 21st century. The new museum houses an entire floor dedicated to the MCA Collection, a National Centre for Creative Learning and a series of site specific artists' commissions. 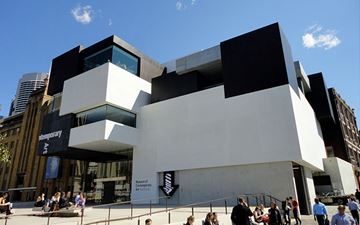 Caroline Rothwell investigates the relationships between humanity, the botanical, and the industrial.