Tai Kwun Contemporary is proud to announce Wet feet __ dry feet: borders and games, a solo exhibition by Francis Alÿs, one of the most influential conceptual artists of our time. Structured around the artist's interest in migration, borders, and his fascination with children's games from around the world, this exhibition brings together for the first time in Hong Kong three important and interconnected projects by Alÿs, including newly commissioned videos by Tai Kwun Contemporary. The exhibition runs from 28 October 2020 to February 2021.

Critically acclaimed and internationally admired, Francis Alÿs (b. 1959, Belgium; based in Mexico since 1986) has a complex and at times elusive artistic practice that poetically fuses an imaginative, conceptual sensibility with the socio-political momentousness of issues related to urban spaces, transnational borders, and geopolitical concerns. While his works are charged with political concerns, what is significant is how he opens up an artistic space for doubt and invention—often through ephemeral actions initiated and documented by the artist which leave no trace and yet conjure up fables.

Curated by Xue Tan and Sunjung Kim and co-presented by Tai Kwun Contemporary and Art Sonje Center, Seoul, the exhibition's title is based on the "spark" to Alÿs's works on view— the "Wet Feet, Dry Feet" policy on Cuban refugees in 1995. Under this policy, Cuban migrants headed for the United States faced vastly different treatment depending on whether they were intercepted at sea or on land, on US soil. If intercepted at sea ("wet feet"), they would be repatriated back to Cuba; if intercepted on land ("dry feet"), they would be allowed to stay in the United States. For a Hong Kong audience, this might sound uncannily familiar: the "Touch Base" policy in 1970s Hong Kong meant that Mainland Chinese migrants would be sent back to the Mainland if intercepted at sea or in the New Territories; only if they reached south of Boundary Street—the formal boundary between Kowloon and the New Territories—were migrants allowed to stay legally in the territory (in the quirky British sports reference, "touch base"). 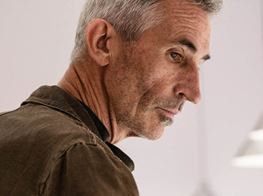 Sign up to be among the first to know when new exhibitions by Francis Alÿs or at Tai Kwun Contemporary open.