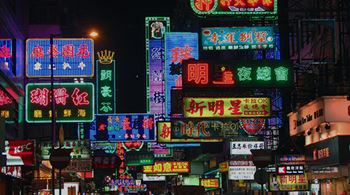 With a host of exciting contemporary art spaces, Hong Kong continues to be identified as a global super art city. The city's stellar selection of galleries, which includes art world heavy hitters like Hauser & Wirth, Gagosian, David Zwirner, and Lévy Gorvy, speaks for the art scene's quality. Many of these spaces are located in Hong Kong's Central district, in the Pedder Building and the William Lim-designed H Queen's building, which opened in 2017.

In the Pedder Building, Gagosian joins other international galleries like Pearl Lam Galleries, Simon Lee Gallery, Lehmann Maupin, and Massimo De Carlo, along with Hanart TZ Gallery. The latter is directed by Johnson Chang, who is largely accredited with igniting the city's art market. Chang founded Hanart TZ in 1983, a decade prior to his famed organisation of the group exhibition China's New Art, Post-1989 at the Hong Kong Arts Center in 1993, which contributed to the explosion of interest in Chinese contemporary art.

In 2000, Chang co-founded Asia Art Archive with Claire Hsu, enabling comprehensive access to art historical material of the Asia-Pacific region. The Archive also hosts extensive public programming, including talks, performances, and exhibitions, while its library offers a site of quiet refuge above the bustling neighbourhood of Sheung Wan.

Nestled on the hillside near Hong Kong Park is Asia Society Hong Kong Center, an educational non-profit organisation dedicated to generating understanding of countries and cultures across Asia. A site for seminars, lectures, cultural programmes, and films, Asia Society also hosts an array of art exhibitions in its Tod Williams and Billie Tsien-designed space, ranging from presentations of work by late Hong Kong artist Hon Chi-fun (A Story of Light, 12 March–9 June 2019), to those of renowned American artist James Turrell (Yukaloo, 12 March–9 June 2019).

Beyond the city centre, Hong Kong Island's outlying neighbourhoods are home to some of the city's most exciting spaces. One of these neighbourhoods is Wong Chuk Hang in the Southern District, which has attracted a number of galleries in recent years due to its large, airy industrial spaces—a feature that saw Belgian Axel Vervoordt Gallery move from its Central Entertainment Building to a two-level space in the dynamic cultural hub in 2019. Other spaces in this area include Blindspot Gallery, which predominantly represents emerging and established artists from Hong Kong and Mainland China, including Isaac Chong Wai, Lam Tung Pang, Chen Wei, and Leung Chi Wo. Founded in Paris in 1977, de Sarthe Gallery opened its 10,000-square-foot space in the area in 2017, showcasing a combination European masters and young international artists.

On the other side of the island, in Quarry Bay, lies Para Site. Founded in 1996, this non-profit organisation is one of Asia's oldest, most active independent art institutions. Acting as an educational platform, the exhibition site also produces publications and public programmes that contribute to the region's critical discourse.

Founded a decade earlier than Para Site is Videotage, a non-profit organisation that began as an artist collective comprising May Fung, Ellen Pau, Wong Chi-fai, and Comyn Mo before establishing itself as a platform for the promotion, creation, and exhibition of new media art. The space has held a fundamental role in the development and preservation of the city's legacy of video art, running exchange programmes and residencies for local and international artists while building an extensive archive both online and offline.

A series of new contemporary art museums and spaces have been added to the mix in recent years, with M+—scheduled for completion by March 2020—looming at the throne. Its Pavilion space, which has been open since September 2016, has showcased an impressive line-up of exhibitions that are now complemented by high-profile presentations at the city's latest multi-million-dollar restoration project, Tai Kwun Centre for Heritage and Arts, an ex-prison complex that includes the cutting-edge JC Contemporary, where exhibitions by international artists such as Takashi Murakami attract impressive footfall.

Across the harbour, the Jordan-based hotel-cum-workspace Eaton HK has become the it crowd's latest hub, with its retro interior inflecting a combination of Memphis design and old Hong Kong while playing host to Eaton Workshop—a 'modern day community center and laboratory' that supports grassroots activism and artistic practice with an exciting programme of events and activities. Also this side of the harbour, in Tsuen Wan, is the Centre for Heritage, Arts and Textile, another impressive restoration project that has seen the revival of The Mills of Nan Fung Textiles, a building that belonged to the city's once-thriving textile industry. The centre's primary aim is to regenerate this legacy by showcasing a variety of curated programmes that engage contemporary art, design, science, heritage, community, and craftsmanship.

A Scenery of Time

Photography. My Passion. My Life.

Men from the Sixties