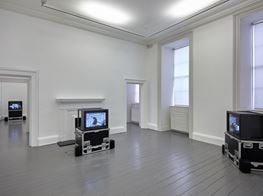 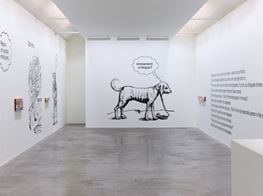 Walking up the narrow walled stairway into the warm pink glow of Ack Ro', Jaki Irvine's latest solo exhibition at Kerlin Gallery (24 January–29 February 2020), the viewer is gradually introduced to a collaged burst of video, audio, and neon: what seems to be a wild disarray of interconnected yet fragmented pieces of a whole.

The initial feeling of disorientation is a calculated measure. This ambitious, holistic installation delves into the emotionally fraught subject of dementia, which the artist acknowledges as a current and ongoing silent epidemic. Composed of 17 reddish pink neon scripts and a 13-channel video, from which haunting sonic undulations emanate like a chorus, individual components—including vocals interspersed with flute, piano, percussion instruments, and ambient noises—come together like a manifesto.

Navigating the gallery space invokes a feeling of containment, like being inside the mind of someone experiencing a dilapidated sense of time and place, or multiple moments at once.

Navigating the gallery space invokes a feeling of containment, like being inside the mind of someone experiencing a dilapidated sense of time and place, or multiple moments at once. Video monitors of varying sizes and orientations are spread throughout the gallery—four screens are suspended from the ceiling, while nine others are placed along the gallery walls and floor, three of which are synced. These synced screens pull the most focus; they are the loudest in terms of volume and imagery. Multiple recordings have been overlaid to make a composite moving image, with each layer moving in and out of focus. We see the lips of singer Louise Phelan as she sings eerie and operatic lyrics, instruments like the piano and cymbals being played sporadically, and a zoomed-in shot of a curvy pink neon hovering in the middle distance. The colours are vibrant yet dark, their night-time tones set off by artificial light. 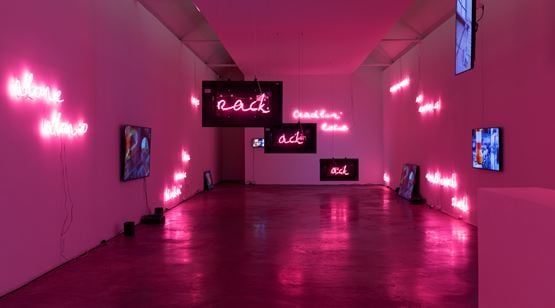 The music from this synced element was a collaborative composition between Irvine and musicians Joe O'Farrell, Izumi Kimura, and Sarah Grimes, with Phelan's vocals leading the piece: a haunting rendition of a 1970 song by Neil Diamond titled Cracklin' Rosie, whose title has been spliced and anagrammed to give the exhibition. In Phelan's rendition, transposed phrases and words replace parts of the original lyrics in a manner that treats the song title as a modular form: an approach that similarly developed the neon scripts on view. The Cracklin' Rosie neon is displayed with prominence on the wall at one end of the gallery, with a snipped version spelling Ro' Ro' below it, and the phrase chiselled into the raw, sonic R R R further down.

The reconfiguration of a single song title demonstrates changes of meaning once a whole has become fragmented, which seems to comment on the manipulations that the mind is capable of making in order to insulate or express itself in times of disorientation. This feeling is heightened by the staging of this exhibition's neon elements, which are dispersed, at times paired or grouped, and attached to the backs of the suspended monitors in the central space. Electrical wires are left exposed, connecting components as if these were the internal networks of a brain. 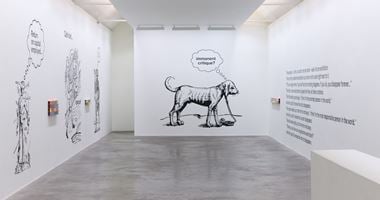 Music is an informing narrative throughout this exhibition, with recordings of natural ambient noises as well as the reconfigured phrases made from Cracklin' Rosie also featuring in the 'wild' soundtracks, as Irvine refers to them, of the ten screens that encircle the space. Each video shows seemingly mundane everyday scenes from Dublin and Mexico City, between which the artist lives and works, from the scaffolding of a building swaying in the wind, birds visiting a hanging yellow feeder, and a dangling broken light, to a pink freckled white lily and a parking lot with hearses piled to one side. In contrast to the darker tones of the synced videos, these scenes were mostly shot during the daytime, balancing out the exhibition's colour palette while creating a sense of displaced timelines. Running in individual loops, videos have no specific or set duration in relation to one another, resulting in a composition that feels at once connected yet disjointed.

The sense of looped and renewing uncertainty, dilapidated timeframes, glimpses from across cities, and a vague resemblance to a song once played on repeat, Ack Ro' is haunting yet full of hope. It offers music and its structures as a means to beautifully navigate, retrace, and comprehend the machinations of a life in flux. —[O]

Established in 1988, Kerlin Gallery continues today to provide the artists it represents with multiple platforms to promote and present their work locally, nationally and internationally; by supporting the visual arts ecology and infrastructure in 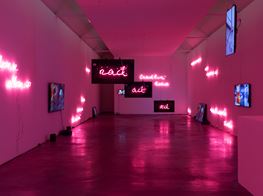 Kerlin Gallery is pleased to present Ack Ro', an exhibition of new video, audio and neon by Jaki Irvine. An opening reception in the company of the artist will take place on Thursday 23January. Ack Ro’ contains an ambitious new 12-channel