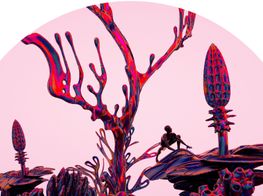 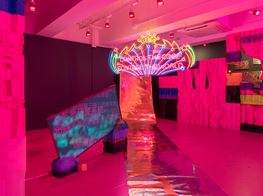 In his 1999 'Law of Accelerating Returns', inventor and futurist Ray Kurzweil proposed that technology would advance exponentially over the next decades so that human civilisation could achieve in the first twenty years of the 21st century the equivalent of what had been achieved throughout the entire 20th century.

While this is now, in retrospect, questionable, actual technological advancements since the 20th century have nevertheless brought about the question of whether artificial intelligence (AI) will eventually surpass human intelligence.

Though AI is at the moment capable of sensing, recognising, and creating, it has yet to attain autonomy. The impression remains however that we are on the cusp of a technological explosion, and that what happens in the next few decades could potentially threaten the existence of humanity.

Our species' fear of the unknown and uncontrollable ignites a profound curiosity in Vvzela Kook, leading her to imagine a future where humanity and AI coexist at Para Site in Hong Kong, for her current solo exhibition Confidential Records: Overwrite (5 December 2020–21 February 2021).

Kook's science fiction series 'Confidential Records', ongoing since 2016, originates in her extensive research into the history of Kowloon Walled City, an ungoverned, densely populated enclave in Hong Kong, whose history between World War II and its demolition in 1993 contributed to Hong Kong's cyberpunk image.

Taking into account the predictions made by the Law of Accelerating Returns, the premise of the series is the threat presented to humanity by AI, which has, at the moment described in the series, surpassed human intelligence.

Inside the exhibition space, the audience is immersed in a futuristic cityscape constructed through 3D printing. In Dual Metropolitans, AI has taken over the world, and the Kowloon Walled City, hidden underground, becomes humanity's last line of defence.

In Execution, the clash between humanity and AI reaches its climax. The AI authority rules through extreme, coercive ideological reforms.

In the new iteration of this chapter, made for this exhibition, the artist manipulates the audience's spatial and sensory perceptions through interactive installations and spatial design, placing the audience in the position to resist absolute subjugation.

The work reflects a universal condition of individual resistance in dystopian societies, and the parallelisms and entanglements between different totalitarian regimes in the past, present, and future. In the quest for absolute order, efficiency and stability are prioritised above all else, and those without a stake in society will be eliminated, wherein 'civilisation is sterilisation'.

The eponymous work commissioned for this exhibition, Overwrite, takes the form of a multimedia walk. Kook has been an avid reader of detective novels since she was young.

Similar to a detective mystery, the walk is guided by an AI character that has defected to the side of humanity, taking the audience through a narrative out of the exhibition space into the streets nearby to pursue a series of clues that interrogate the ideological transformations enforced by the AI authority.

The work explores the nature of memory, particularly the imminent danger of memory being used as data, as well as critiquing the ways authoritarianism erases memories and takes over historical narratives.

Confidential Records: Overwrite presents multilayered juxtapositions and tensions, the virtual and the real, the emotional and the rational, as well as the relationship between the individual and authoritarianism.

These are both part of Kook's imagination of the future, as well as reflections of our current times, forcing us to confront reality as it is and as it might become. —[O]

The exhibition is currently on view by appointment only.

Vvzela Kook (b.1990, lives and works in Hong Kong) graduated from the School of Creative Media at the City University of Hong Kong with a MA in Creative Media. As a new media artist, she works in audiovisual mediums – including performance, theatre,