Faith Wilding’s (b. 1943) work has been exhibited extensively over the last five decades including the seminal survey WACK! Art and the Feminist Revolution, organised by Cornelia Butler, which traveled from the Museum of Contemporary Art (Los Angeles) to the National Museum of Women (Washington DC), PS1 Contemporary Art Center (Long Island), and the Vancouver Art Gallery. Additionally, Wilding’s work has been exhibited at Reina Sofia Museum (Madrid); Centre for Contemporary Arts (Glasgow); Bronx Museum of Art (New York); The Whitney Museum of American Art (New York); the Armand Hammer Museum (Los Angeles); The Drawing Center (New York); Documenta X (Kassel); the Singapore Art Museum. Publications include By Our Own Hands: The History of the Women Artists Movement in Southern California, 1970—76 (Double X, 1977) and Domain Errors! Cyberfeminist Practices! (Autonomedia, 2003). Wilding was awarded a Guggenheim Fellowship in 2009 and has been the recipient of two individual media grants from the National Endowment for the Arts. In 2014, she was awarded the prestigious Women’s Caucus for Art Lifetime Achievement Award. Most recently, her work was included in Fiber: Sculpture 1960 to Present exhibition that originated at the ICA in Boston; her Crocheted Environment (1972/1995), was shown in Art Textiles at The Whitworth Gallery in Manchester, England (where it graced the cover of the catalogue); and documentation of the The Sacrifice (1971) was featured in Axis Mundo: Queer Networks in Chicano L.A., organised by the Museum of Contemporary Art, Los Angeles.

Among other greats, works by Faith Wilding, Judy Chicago, and Mira Schor's hang alongside one another at Anat Ebgi.

Faith Wilding and Sarah Ann Weber in conversation with George William Price, Director of Collections, University Club of Chicago. On the occasion of Anat Ebgi's presentation for Frieze Viewing Room, 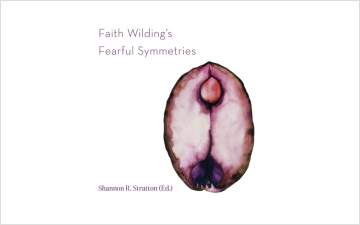