Herbert Beck was born in Leipzig (de) in 1920. He initially completed an apprenticeship as goldsmith in Leipzig and took drawing lessons under professor Max Schwimmer at the Leipzig School of Applied Arts for Graphics and Design. In 1948, after the escape from the Soviets to Tegernsee, he began painting as an autodidact. In the 1950s, the gallery Commeter in Hamburg staged several exhibitions of his oil paintings. Also, Hanna Bekker vom Rath supported Beck early on and organised multiple exhibitions for him during the 1960s.

The acquaintance with Emil Nolde greatly influenced Beck's artistic creativity. Fascinated with the glowing colours in Nolde's watercolours, Beck began to develop his own watercolour technique with strong colouring. Even when painting in oil he achieved a similar character to watercolours by diluting the paint with turpentine exceedingly.

Beck's works belong within the German tradition of Expressionism and show tendencies towards mysticism and magic. Thematically, his oeuvre comprises landscapes, still lifes and figurative compositions. Religious themes take on an important role time and again over the years; dealing with his wartime experiences also becomes evident in numerous works. Even Beck's fondness for jazz and classical music pervades his entire oeuvre as a formal inspiration.

During the late 1970s Beck developed a special technique which was based on random creation. Hence, his „miniatures“ came into being - watercolours of small format with poetic and narrative character.

In 1984, Beck became seriously ill as a result to breathing in turpentine fumes over many years while working on his oil paintings. After his recuperation he concentrated solely on painting with watercolours. During the last years of creation he painted a cycle of watercolours which he named „Faces of the World“. Through the often shocking and unmasking depictions of perpetrators and victims he expressed his idea of the human being in the 20th century. Even his landscape pictures he developed further into the abstract „Meditative Landscapes“ consisting of spatial levels of colour. 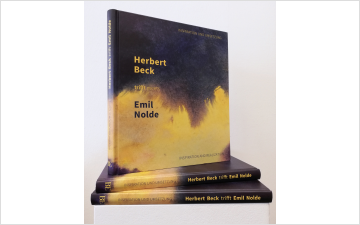