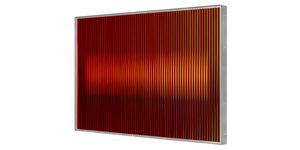 The first solo exhibition of Carlos Cruz-Diez after his recent death is to take place at Dep Art Gallery in Milan, opening on 8th October.

Until January 21, 2020 the exhibition Carlos Cruz-Diez. Colore come evento di spazi—created in collaboration with Articruz—will trace the main steps of the Franco-Venezuelan artist's journey through sixteen great works and highlight the originality of his research, including works from five of his most significant series—Couleur Additive, Physichromie, Induction Chromatique, Chromointerférence, Couleur à l'Espace—as well as an interactive artwork specifically adapted for the spaces of the Milanese gallery: Pyramide d'Interferences Chromatiques (2018).

Considered one of the main exponents of Kinetic and Op-Art, he established himself as one of 20th century leading thinkers in the field of colour, and his artworks are present in the most prestigious museums of the world, such as MoMA Museum of Modern Art in New York, Tate Modern in London, Musée d'Art Moderne de la Ville de Paris and Centre Georges Pompidou in Paris, Museum of Fine Arts in Houston, and Wallraf-Richartz Museum in Cologne.

The title of the exhibition, Colore come evento di spazi (Color as an Event of Spaces), recalls the basis of the work by Cruz-Diez, since the 1960s focused on the perceptive investigation of colour seen not as the element of an artwork but as a real event.

For instance, the works of the Couleur Additive series,—present in the exhibition with some important works such as Color Aditivo Yuruani (2017, chromography on aluminium, 80 x 240 cm)—are based on colour radiation: when one colour touches another, a darker vertical line appears at the point of contact. This virtual line contributes to the work with a third colour that has not been laid by the artist.

Colour becomes the subject of an optical-kinetic research declined not only on the visual surface but in the physical and concrete space of the sensory experience. As recalled by Francesca Pola, author of the catalogue essay, as early as 1963 the artist described his 'Physichromie', representing one of the main nuclei of the exhibition, according to this key: 'The Physichromie, these changing structures projecting the colour of the surface in space, creating an atmosphere that varies with the intensity and position of the light, with the position and distance of the viewer, bring together three modes of colour, touching almost obsessive emotional states: addition, reflection, subtraction.'

Furthermore, Couleur à l'Espace—of which two works are exhibited here—is part of the experiments which Cruz-Diez made on the irradiated colour since 1959. By placing a metal rod on the multi-coloured surface, a spectrum of new colours emerges that the observer can autonomously 'create' and change by moving in space and changing the light conditions.

From the late 1950s, the work of Cruz-Diez was characterised by these coordinates, in a context that sees him immediately active in a close dialogue with the emerging trends of international kineticism. His work is immediately characterised by the bright dynamism of colour, in a continuous vibration determined by the mutual relations of addition and subtraction, reflexes and interferences, saturations and projections. For Cruz-Diez, colour is not a compositional or symbolic element, but rather a real material that gives the possibility of creating an autonomous emotional space, where the spatial event materialises before our eyes and is continually reconfigured through our perceptive-sensory dynamics. What interests him is a colour 'in real time', that he modulates and declines with scientific precision in the perceptively significant relationship, and never in the mere decorative juxtaposition.

The exhibition is completed by a catalogue in two languages—Italian and English—with a critical essay by Francesca Pola. 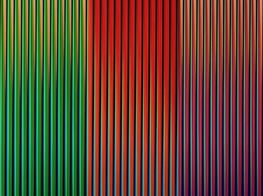 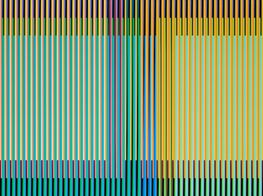 Sign up to be among the first to know when new exhibitions by Carlos Cruz-Diez or at Dep Art Gallery open.