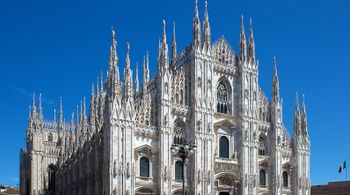 Italy's centre of contemporary design and fashion, Milan is an international cultural and economic hub. Capital of Italy's densely populated Lombardy region in the North, Milan's population is second only to Rome, with its metropolitan area reaching almost to the Swiss border.

It is a city with a rich history that stretches back to the Medieval era, changing hands multiple times under French, Spanish, Austrian, and Italian rulers over the centuries. In the mid-20th century, Milan thrived as an economic and industrial centre. With major luxury fashion houses, including Dolce and Gabbana, Versace, Armani, and Prada having their roots in the city, Milan is also a hub of international fashion.

Once drawing Renaissance masters such as Leonardo da Vinci and Donato d'Agnolo Bramante, as well as Italian Futurists like Filippo Marinetti, Milan today is home to a thriving modern international art scene.

Milan's historic city centre is rich with examples of Medieval and Renaissance architecture and is full of palaces and museums containing extensive collections of Renaissance, Neo-classical, and Modern art.

At the heart of the city is the Duomo, a 14th-century cathedral that is one of the largest in the world. In the northwest of the historic city is the 15th-century fortified Castello Sforzesco compound, which contains several prominent institutions. These include the Pinacoteca Castello Sforzesco, which holds works by Titian, Tintoretto, and Canaletto; the Art Library; the Museum of Ancient Art; Museo Egizio; Museo dei Mobili; and the Museum of the Rondanini Pietà. Nearby, one can visit the Santa Maria delle Grazie church and see Leonardo da Vinci's famed fresco, The Last Supper (c.1495–1498).

The Museo del Novecento in the Palazzo dell'Arengario, near Piazza del Duomo, offers a selection of 20th-century art from Pablo Picasso and Georges Braque to Alighiero Boetti.

A city of the present as much as the past, with examples of modern architecture from Gio Ponti to Zaha Hadid, Milan is also home to museums and institutions celebrating Modern and contemporary Italian art and design. Among them are the Triennale di Milano, Museo delle Culture di Milano (MUDEC), Padiglione d'Arte Contemporanea (PAC), and the Museum of AugmentedUrban Art (MAUA) on the outskirts of the city centre.

Inside the historic Porta Romana district in the south of the city, the Milan branch of Fondazione Prada occupies an historic distillery. Inside are several connected galleries for viewing art from the permanent collection and a bar designed by director Wes Anderson. Other non-profit contemporary spaces include the DAP Art Park to the south of the city, and Fondazione Mudima and Pirelli HangarBicocca in the city's north.

Milan is home to a variety of dealer galleries around the periphery of the city centre, offering works by Italian and international artists. Among them are long-established international galleries such as Cardi Gallery, Lorenzelli Arte, and Tornabuoni Art, as well as newer spaces including Robilant+Voena, Kaufmann Repetto, Mimmo Scognamiglio Artecontemporanea, Castiglioni, Dep Art Gallery, Cortesi Gallery, Galleria Patricia Armocida, and M77.