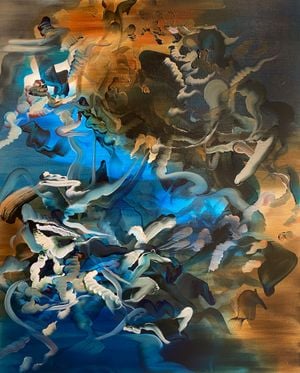 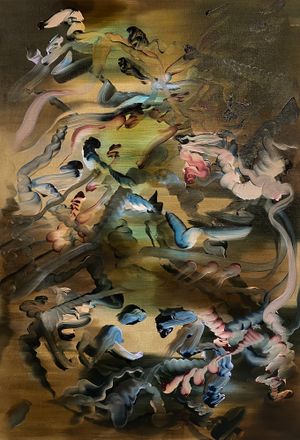 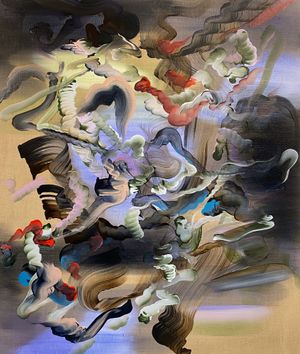 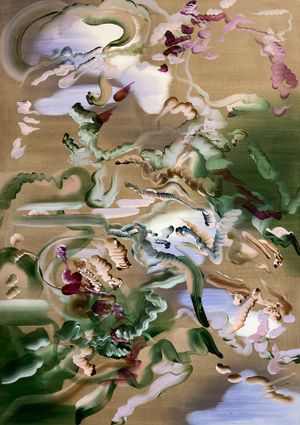 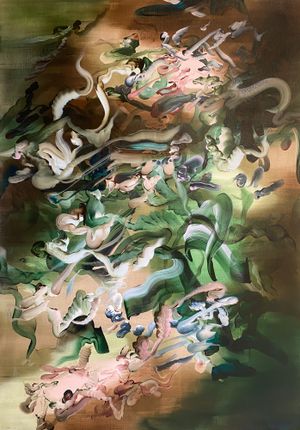 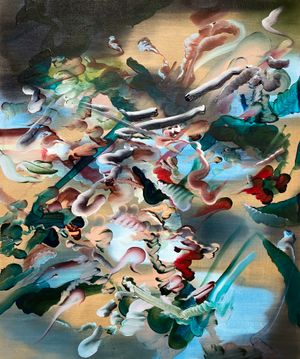 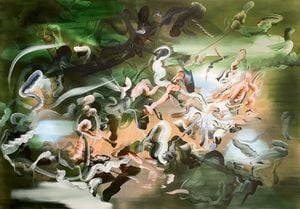 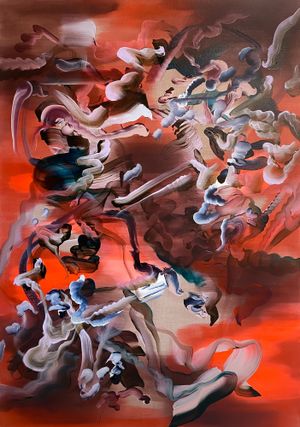 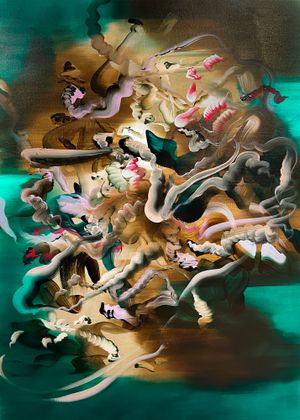 When looking at Grace Wright's paintings, it is difficult not to feel swept up in their visually symphonic energy. Painted onto flat backgrounds of contrasting hues, great swathes of colour and line weave together across her surfaces like a flock of birds riding undulating wind currents.

Graduating with a Masters of Fine Arts from Auckland's Elam School of Fine Arts in 2019, Wright has been a versatile creative force since childhood. Complimentary to her fine arts practice, Wright is an accomplished musician and contemporary dancer, and this affinity to rhythm and movement plays deeply into the way she paints. Working mostly on a large scale, the process of creating her expansive works involves moving her body in wide, sweeping movements. Coupled with a careful consideration of how colours visually interact, Wright's paintings speak of her creative history and stylistic influences.

While Wright's paintings initially appear abstract in nature, hints of the figurative reverberate through each image. The shape of the human body is referenced in the curves and twists of her linework and her chosen colour palette is resplendent with earthy browns and deep reds, and that brilliant ultramarine blue once derived from lapis lazuli. Wright's compositions reach vertiginously upwards, bringing to mind the theatrical triangular compositions of baroque history paintings and church ceiling frescoes. Despite this historical influence, there remains a contemporary edge to Wright's work. The blue she uses might initially remind us of 17th century religious paintings but it is also a modern reference to the vaporous blue emitted by digital screens.

The paintings in Making It All Seem Real represent a slight departure from Wright's previous work and this is primarily due to her experimentation with translucent colour. Via the diaphanous greens and blues of Agony and Triumph, 2021 and Star In The Dark, 2021, Wright injects what she refers to as 'cosmic lighting' into her work, leaning into elements of sci-fi and colours emitted by technological devices. The panoramic splendour of Finding New Ways Of Belonging is inspired by Indian-born, London-based artist Raqib Shaw, known for his gargantuan paintings meticulously embellished with metallic paint and crystals. Across the five panels that make up this work, a narrative of gesture unfolds. As the eye travels over its surface, the journey of physical movement ebbs and flows in lyrical folds of colour and texture. Like the vibrantly expressionistic brushstrokes of German painter Albert Oehlen, there is a fervent sense of tension and release captured within the depths of Wright's visuals.

The physical labour of painting is an integral part of Wright's practice. Working in a large scale demands a full body process of constant movement, and this is continuously reflected throughout the curving arcs and tight coils populating each layer. Viewing Wright's immense picture planes up close, one becomes immersed in a cascading churn of colour that seems to flow far beyond the constraints of the canvas. It is a distinctly feminine space, one that challenges the masculine traditions typically seen in large scale narrative-based paintings. Instead of offering us a heavily illustrated scene, Wright's paintings envelope the eye with an atmospheric glory, distilling the purely figurative into a richly abstract record of physical movement and luminous colour.

Making it all seem real

Sign up to be among the first to know when new exhibitions by Grace Wright or at Gallery 9 open.
Sign Up
}