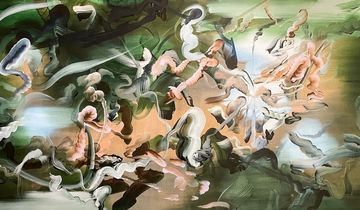 Born in Tauranga, New Zealand, Grace Wright studied at the Elam School of Fine Arts in Auckland, graduating with a BFA in 2014. She later returned to complete an MFA between 2018 and 2019.

Wright cites as her artistic influences New Zealand painters like Judy Millar and André Hemer. She also takes inspiration from the practice of international artists, for example the scale and dynamism of American artist Mary Weatherford and also German artist Albert Oehlen.

Grace Wright's artistic influences are as much a part of her work as her background in dance and music. A fascination with rhythm and fluid movement is evident in Wright's paintings in the push-and-pull of long brush strokes that diverge and re-converge.

Painting and the body

Interested in expressing a sense of the body through her work, Wright's earlier graphic works morphed into looser and larger paintings towards the end of her MFA as her style developed. She began experimenting with techniques of winding brush strokes that thinned and unfurled across the canvas in curving, and at times fleshy forms. Her gestural approach records the movements of her own body, documenting the sweeping, jabbing, and flicking actions of the arm and wrist. More than simply rendering bodily form, it intends to evoke the sensation of both existing within a body and relating to it.

As Wright began to embrace a more gestural and bodily approach to her practice, she equally began to explore art history more overtly in her compositions. In the over-three-metre-long Final Fantasy (2020)—one of several works on show that the artist painted during lockdown—one can clearly see a shift to a more monumental scale and also reference to the religious painting of the Baroque movement. Gestural abstractions evocative of fleshy figurative forms play out against a background of strong diagonal lines and intense chiaroscuro lighting, evoking the paintings of European masters like Rubens and Carracci.

Wright explains the subversive intent of this development: 'Painting on a monumental scale is usually associated with masculine values, but I aim to subvert this, creating work that is bold and unapologetic, while also fully embracing of its vibrant feminine attraction and visual pleasure.'

The influence of Western art history can also be seen in Wright's solo exhibition at Gallery 9 in Sydney, Making It All Seem Real, where her use of Baroque and Renaissance palettes—Prussian blues, viridian green, dark brown, deep turquoise, and maroon, mingle with a more contemporary palette of metallics and pastel colours. Wright explains, these colours are not only reminiscent of moments of light in the natural world, but also suggest the blue false light of technology. What results is something hovering between historic figuration and contemporary expressions of pure energy.

Grace Wright's artworks have featured in several group and solo shows across New Zealand and Australia. One can often find examples of Grace Wright's art for sale at trans-Tasman art fairs such as the Auckland Art Fair and Sydney Contemporary.