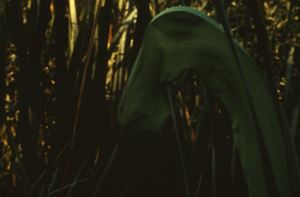 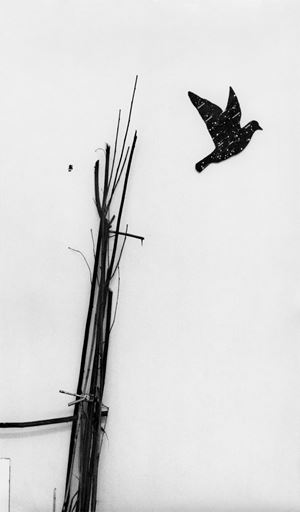 Marian Goodman Gallery is pleased to announce an exhibition by Lothar Baumgarten (1944-2018) which will open on Thursday, 9 January, and be on view through Saturday, 15 February.

Created in close collaboration with the artist before his passing, the exhibition Lothar Baumgarten The Early Years focuses on the formative works that shaped his oeuvre. The exhibition is an homage to one of the most important German artists who influenced a subsequent generation, and whom Marian Goodman has represented since 1985.

Lothar Baumgarten The Early Years focuses on the years before his now legendary first journeys to South America in 1977 and 1978 to live with the indigenous Yanomami people. The show assembles works from 1968-1977, which were conceived in the Rhineland and seem to anticipate many of the artist's better-known works from the late 1970s on. In this early period, Baumgarten established a visual vocabulary that would inform his entire oeuvre and quickly brought him recognition and introduced him to a wide public, including in 1972 in the Harald Szeemann-curated documenta 5.

Born the son of an ethnographer and raised in Cologne during the final years of WWII, Lothar Baumgarten was familiar early on with the study of comparative cultures and, from the beginning, interested in the methods of anthropology and their ordering principles that inform the thought, perception, and representation of cultural difference.

When Baumgarten studied under Joseph Beuys at the Düsseldorf art academy in the late 1960s and created his first works as an artist, he found himself in a cultural milieu dominated by a post-fascist pioneering spirit that gave rise to a unique and active art scene in the Rhineland. Baumgarten quickly developed a distinct language informed by the then prevalent conceptualism that broke away from the 'spectacularisation' of memory and memory's inextricable intertwinement with Germany's fascist past." On that note, Benjamin H. D. Buchloh continues: 'One could argue that turning away from Germany's inability to mourn - diagnosed by Alexander Mitscherlich in the late 1960s as a collective condition - and transposing the contemplation of loss onto tribal people whose existence is under duress, if not mortally imperiled, is a project in which mourning is conducted by transposition.' 1

Lothar Baumgarten's artistic practice was from the outset characterised by a great openness and freedom in terms of media. By means of photographs, drawings, sculptures, installations, slide projections, films and texts and inspired by the structuralist analyses of the ethnographer and anthropologist Claude Lévi-Strauss, the artist sought to trace and reflect Western-influenced myths in his art. 'Though trapped in my Western thought patterns, I have always been interested in the 'Other,'' Lothar Baumgarten noted. 'I thought I couldn't reflect my own cultural context without knowing another one.'

On view in the North Gallery is a selection of Lothar Baumgarten's colour photographs from the 1968-1972 series 'Culture-Nature (Manipulated Reality)', as well as a number of black-and-white photographs mostly of ephemeral sculptural interventions, including some the artist staged and photographed in the Rheinaue wetlands not far from his home. As a reptile meets a sink, jungle meets kale, and pyramids meet molehills, it also becomes clear how fragile meaning and representation are and how apparent the structuralist binarism is.

While the works on paper of Map with Planes (1968) and Molecules II (1968) still evoke the bombings of the war, the mythical creature in Dream Drawing (c. 1968) seems to hint for the first time at a surrealistic escape in the elsewhere of the unconscious.

In his miniature hothouse sculpture Conservatories (Guyana) (1969-1972/2012), Baumgarten combines kale, a variety indigenous to the artist's home region, with a genus of moth, thereby collapsing the distance between European and non-European cultures by creating a self-sustaining environment while referencing Guyana, a region of undisturbed tropical rainforest bordering the Amazon Basin.

With Pyramids (1968/1982/2020), Lothar Baumgarten has transformed the North Viewing Room into a model colour scape parcours. While the floor sculpture may evoke painterly references to Yves Klein or his friend Blinky Palermo, the pyramids suggest archaic high culture, fragility and transience. The ephemeral sculptures were Baumgarten's response to the growing market conformity he felt exposed to with the advent of the first art fair in Cologne.

The 1969 slide projection Unsettled Objects in the South Gallery uses eighty-one photographs of the Pitt Rivers Museum in Oxford to visualise how European museums present and store their ethnological and anthropological treasures. This projection was Baumgarten's first text piece. As an early nod to an institution-critical gesture, the verbs and adverbs seem to comment on and call into question not only the images, but also the scientific activities of classification, categorisation and conservation.

The nearly two-hour film The Origin of The Night (Amazon Cosmos) (1973-1977), which references a myth of the indigenous Tupi people, is a meditation on the South American rain forest that was filmed in its entirety along the Rhine near Düsseldorf Airport. In it, the dichotomies of day and night, new and old worlds, and nature and culture unfold glacially and immersively. Only at the very end, in the film's closing credits, does Baumgarten reveal where the compelling and poetic images of The Origin of the Night were shot. What critic Margaret Sundell said about the film can also be used to describe Lothar Baumgarten's overall practice: 'His work 'is also quite clearly a forest of symbols'.'

Lothar Baumgarten was the recipient of the mfi Award, Kunst und Bau, Essen, Germany (2003); the Lichtwark Prize, City of Hamburg (1997); The Golden Lion, First Prize of the Venice Biennale, Italy (1984); the prize of the State of Nordhein-Westfalen (1976); and the prize of the City of Düsseldorf, Germany (1974).

Please join us for the opening of this special exhibition which will honour and celebrate the legacy of Lothar Baumgarten (1944-2018), on Thursday, 9 January, from 6-8 pm.

Sign up to be among the first to know when new exhibitions by Lothar Baumgarten or at Marian Goodman Gallery open.