Roberto Almagno sculpts exclusively with wood, which he collects in the forests outside his native city of Rome. Painstakingly straightening the wood over many hours, he then uses the ancient technique of moisture and heat to bend the wood into elegiac and timeless shapes in a constant quest for formal perfection and suspension in space. The fragility of the material and its transformative powers are evoked by Almagno's elongated and abstract forms which seem to be attempting to dissolve into nothingness. Steeped with a timeless purity, his work echoes a lifelong investigation into the idea of lightness and on the formal limits of a seemingly impossible precarious balance. Conceptualising sculpture as an on-going and unending flow, Almagno's pursuit of figures that are 'no longer bearing the weight of life' reveals inherent aspects of mysticism.

Roberto Almagno (b.1954, Aquino, Italy) currently lives and works in Rome, Italy. Almagno has exhibited in numerous galleries and museums, including solo shows at the Carlo Bilotti Museum, Rome, the Museum of Contemporary Sculpture, Matera at Palazzo Venezia, Rome and Pericle Fazzini Museum. 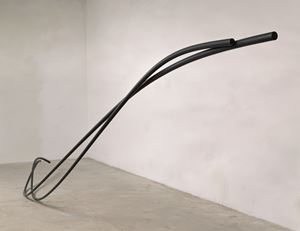 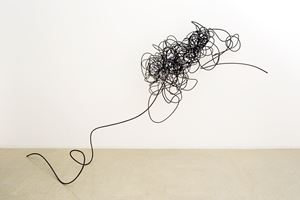