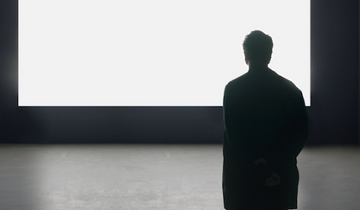 In his prolific practice, artist and architect Alfredo Jaar engages with the power and politics of images. Using a range of methods including installation, photography, filmmaking, and community-based art to explore topics such as globalisation, fascism, immigration, and homelessness, the artist's work is always researched-based, created in reaction to a real event.

Jaar will study an occurrence that has caught his interest and use art to add his own layer to the story: 'I have never created a single work that is just a pure product of my imagination or me as an artist in the studio. When I'm interested in a certain issue, I travel to a place and I investigate—I react', the artist said in his interview with Kate Brettkelly-Chalmers for Ocula Magazine. Within this method, he acknowledges the impossible-to-close gap between experience and record, or even ability to record. Previously, he has created art about events such as Rwanda's genocide and the Fukushima Nuclear disaster. In engaging with such calamities, he hopes to bear witness—to give visibility to those who are left invisible.

Jaar describes himself as an 'architect who makes art'. In his youth, he wanted to become an artist, but growing up in Chile in the 1970s this dream seemed unattainable. So he decided to study in the more stable field of architecture. Luckily for him, in architecture he found a passion equal to art: 'when I discovered architecture I was the happiest man on earth.' As an artist now, Jaar still considers space architecturally in all its realms—socially and politically as well as physically—and maintains an architect's eye for logic and detail.

Born into a Socialist Chilean family, the artist came of age in a Chile ruled by Augusto Pinochet's military dictatorship, in which dissenters would disappear overnight. Later in his career, the artist would receive a commission to create a memorial to the victims of Pinochet's regime, entitled The Geometry of Conscience and completed in 2010. Only ten people are able to view this memorial at a time, each group descending a staircase of 33 steps into the pitch-black memorial space. After one minute of total darkness, the back wall of the space slowly lights up to reveal a grid of hundreds of white silhouettes. The walls on either side of the back wall are mirrored, creating the illusion that these silhouettes reach into infinity.

After the lights of the silhouettes in The Geometry of Conscience reach their brightest, they switch off, and the space is once more enveloped in darkness, leaving only a ghost-image of the figures behind. The silhouettes outline both deceased victims of Pinochet's regime and living Chileans. In doing so, the memorial acknowledges not only victims of the regime, but also the '17 million Chileans who are alive today and trying to retrace their common history', according to Jaar's studio manager, Capucine Gros.

Jaar arrived in New York in 1982, using his architecture career to finance his art practice. He is perhaps best known for a video work created after arriving in New York: his 1987 animation, A Logo for America. This artwork was placed on a billboard in Times Square and played amongst a rotation of advertisements every six minutes for a fortnight. In the animation, the viewer sees the map outline of the United States of America, the country's flag, and the texts 'THIS IS NOT AMERICA' and 'THIS IS NOT AMERICA'S FLAG'. The final image of the animation is the map outline of the continents of America (North and South), shown with the word 'AMERICA'. In A Logo for America, the artist draws attention to the way social preconceptions and priorities are reflected and misled in language. Projects such as this illustrate his interest in art's ability to make connections and reveal cracks in the system—to point out cultural distortions.

Alfredo Jaar became a Guggenheim Fellow in 1985, and a MacArthur Fellow in 2000.

The 2022 Whitney Biennial takes the pulse of contemporary art in America.

View All (11)
Related Press Alfredo Jaar on the Capacity of Culture 19 February 2019, Hyperallergic

The billboards going up around the country this week will have a familiar message for this midterm election: Vote. But featuring images of protests and reminders of the 2016 election, produced by some

Alfredo Jaar does not describe himself as an artist, nor as a sculptor or filmmaker. Nonetheless, the Chilean has produced artworks, installations, films and photographs that focus on politics and hum

There are photographs that strike me as insurmountable. An image of presumable lovers, falling hand in hand from the World Trade Center as it burned. The image of a Vietnamese girl, screaming from the burning effects of napalm. The pain these photographs elicit is debilitating and the experience of seeing them is voyeuristic, not productive. The...

Sign up to be notified when new artworks and exhibitions by Alfredo Jaar are added to Ocula.
Sign Up Login