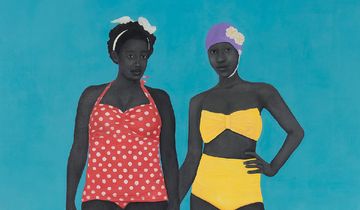 The general public's knowledge of artist Amy Sherald rose considerably after she was invited to paint Michelle Obama in 2018.

Through her portraits of African Americans, Sherald has extended the discourse about racial stereotypes and representation in historical and contemporary American art. She is known for painting her subjects' skin tones in grisaille and contrasting them with vibrantly coloured clothing and pastel backgrounds to heighten a sense of surreality and timelessness.

Amy Sherald graduated with a BFA from Clark Atlanta University in 1997, and received her MFA from Baltimore's Maryland Institute College of Art in 2004. The artist said in a 2016 interview that living in Baltimore shifted her concern from autobiographical work to that which focused on addressing the imbalance in representations of African Americans.

Amy Sherald's use of grisaille is in part inspired by the portraits of African American families that W.E.B. Du Bois compiled for the 1900 Paris Exposition. By presenting photographic evidence of African American affluence, Du Bois sought to challenge the racist and stereotypical representation of black people. Sherald's figures, rendered in neutral grayscale, evoke historical black-and-white photographs while dissociating race from colour.

In 2016, with Miss Everything (Unsuppressed Deliverance) (2014), Amy Sherald became the first woman to win the Outwin Boochever Portrait Competition. Based on a photograph of a friend, in the work a woman in a vintage dress and a red hat raises an oversized teacup in her hand. The artist told the National Portrait Gallery that the work was inspired by Alice in Wonderland and addresses the notion of self-presentation, considering 'the idea of being seen as anything other than the colour of her skin'.

The Outwin prize led to Amy Sherald's portrait of Michelle Obama, commissioned by the National Portrait Gallery, in which the former first lady of the United States is seated against a soft blue background. Her Michelle Smith dress fabric pattern references African American quilting traditions and the modernist abstractions of Piet Mondrian. Unveiled in 2018, Sherald's portrait increased attendance to the gallery alongside Kehinde Wiley's portrait of former United States president Barack Obama.

the heart of the matter... (2019)—Amy Sherald's solo exhibition at Hauser & Wirth, New York—featured a new body of works focusing on young African Americans. In full-length and nearly full-length portraits, the artist painted semi-fictional figures drawn from photographs she took of anonymous people. Many face the front, as is characteristic of her work, such as The girl next door (2019), who appears in a brightly coloured polka-dot dress.

In If you surrendered to the air, you could ride it (2019), on the other hand, a young man sits on a green steelwork high up in the sky. The work recalls the photograph Lunch Atop a Skyscraper (1932), which depicted white-presenting ironworkers eating lunch on a crossbeam of the Rockefeller Center. Sherald's reference to this work hints at African Americans' generally unrecognised contribution to building the contemporary United States.

Amy Sherald's Miss Everything was part of the travelling exhibition The Outwin 2016: American Portraiture Today, which began at the National Portrait Gallery, Washington, D.C., in 2016 and toured to Washington, Texas, and Missouri over the following two years. In December 2020, The Bathers (2015)—a portrait of two African American women in swimsuits—exceeded its presale estimate by nearly 30 times at Phillips' Evening Sale of 20th Century & Contemporary Art, selling for $4.2. million.

After climbing the stairs of Hauser & Wirth's Chelsea gallery, I encountered Amy Sherald's gripping portrait of a young Black man whose eyes convey a sense of quiet introspection that persists through

As always, there are many wonderful exhibitions, film festivals, and art events taking place throughout the fall in New York. We've put together our recommendations, and hope that they encourage you t

ST. LOUIS — On the opening night of her exhibition at the Contemporary Art Museum St. Louis, Amy Sherald is jubilant, albeit being pulled back and forth by museum staff and obliging cordially as perso