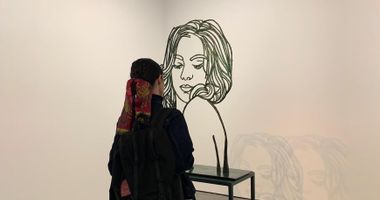 Ghada Amer (b. 1963, Cairo) is best known for her subversive embroidered paintings that appropriate imagery from pornographic magazines as a means of creating an entirely feminine and feminist language of painting. She studied at the Villa Arson in Nice, where she was told that certain painting classes were reserved exclusively for male students. This served as the pivotal moment for Amer's practice, at which point she began to create her own unique space within the medium of painting. Her consistent use of embroidery in her paintings, a skill traditionally associated with femininity or 'women's work,' in conjunction with the erotic imagery of women in positions of sexual pleasure realigns our notions of objectification. Historically the female nude as rendered by the male artist reduced the painting's subject to mere physical body deprived of agency. The embroidery imbues each image with a tenderness that bypasses this reduction. She at once rejects oppressive laws set in place to govern women's attitudes toward their bodies and repudiates first-wave feminist theory that the body must be denied to prevent victimisation. The women in Amer's paintings are neither objects nor victims, but rather autonomous subjects with inalienable identities.

Even outside of her painting practice, such as with her garden installations, ceramics, and sculptures, Amer continues to consider notions of femininity and love. She links each of these media to the act of painting. 'All my work is about painting and [the] history of painting,' says Amer. Her sculptures and gardens frequently incorporate language, as with Women's Qualities, which was staged first during the Busan Biennale in 2000 and again in 2020 for Frieze Sculpture at Rockefeller Center. Both times, Amer asked passersby what qualities they would attribute to women. She then took the most common responses and spelled them out in flower beds. The words ranged from 'docile' and 'virgin' in the earlier iteration and expanded to 'kind,' 'resilient,' and 'independent' for the later installation. The evolution of the project reveals changing notions of feminine identity, from an expectation of subservience into an equally impossible and unrealistic view of woman as a modern goddess.

Recently, Amer began exploring ceramics in a two-year residency at the Greenwich House Pottery Studio. They show her interest in circumventing the boundaries of media, as the ceramics function as 'paintings' that exist within the space itself. This notion extends even into early studies for ceramics done on cardboard, as the works can be appreciated from all angles. She found the studies so compelling that she kept them as unique artworks themselves, which places her squarely within the ages-long tradition of viewers treasuring the earliest manifestation of an artist's idea for a work, as they worked through the inspiration.

Amer's works have been exhibited at a wide variety of institutions including the Museum of Modern Art in New York, the Whitney Biennial, the Venice Biennale, the Brooklyn Museum, the Smithsonian National Museum of African Art in Washington, D.C., the Centre Georges Pompidou in Paris, the Garage Center for Contemporary Culture in Moscow, among others. Her works can be found in the collections of the Art Institute of Chicago, the Brooklyn Museum, the Centre Georges Pompidou, the Museo Jumex in Mexico City, the Crystal Bridges Museum of Art in Arkansas, the Guggenheim Abu Dhabi, the Museum of Arts and Design in New York, and the Leeum, Samsung Museum in Seoul, among others.

Now in its third instalment, DESERT X 2021 is among the first major art events to return to the region since California went into lockdown last year.

View All (9)
Related Press How Egyptian artist Ghada Amer has weaved an expression of feminism into her paintings 13 April 2021, The National News

Ghada Amer, in her current exhibition at Cheim and Read, does something that formidable artists do: makes a proposal that is, in essence, unanswerable. In her 2016 painting Women in White, she combi

Though discovered in 1974, in the midst of African decolonial processes and independence struggles, the original ancestor of all humankind, an African woman was given the name Lucy. But what about her African roots? What about her role as the mother of all humankind? Lucy’s Iris  considers Lucy’s view of her prodigal daughters who...

Be among the first to know when new artworks and exhibitions by Ghada Amer are added to Ocula.
Sign Up Login