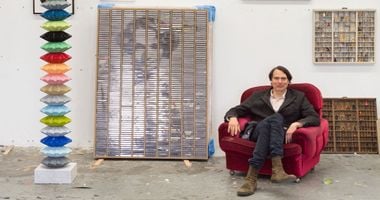 Born in Bad Homburg, Germany, Gregor Hildebrandt studied Fine Arts at Johannes Gutenberg University in Mainz. Graduating in 1999, he went on to study at the University of the Arts in Berlin that same year.

Hildebrandt developed his artistic approach in the late 1990s, while looking to transform songs into visual art. In an early exercise, he sought to integrate a chosen song into a sketchbook by physically incorporating a cassette tape of the music. Hildebrandt's work since has sought to materialise the intangible. As he explains, 'The immaterial state of music drives me crazy. You can't get hold of a song, let alone see it.'

Seminal to his practice, Gregor Hildebrandt's cassette tape and VHS tape paintings have allowed the artist to aesthetically incorporate music and cinema into a concise visual vocabulary. These works form the basis of Hildebrandt's broader approach, which combines principles of found object art and minimalist aesthetics.

Hildebrandt engages in a process that produces dual canvases. Covering one primed canvas with vertical strips of self-adhesive tape, Hildebrandt paints patterns with a translucent fixative. Applying audio or video tape in vertical bands, the magnetic coating sticks to the unfixed adhesive parts of the canvas, separating from the plastic filmstrip. What remains of the tape is applied to a second primed canvas, creating positive and negative editions.

These 'rip-off' paintings culminate in a variety of abstract, often monochromatic, minimalist compositions. These range from expressive works like Staring at the Sea (Cure) (2018) to geometric arrangements like Ich hab mich auf den Boden gelegt (Toco) (2018).

Alongside these 'paintings', many of Hildebrandt's exhibitions feature space-defining wall curtains made of unreeled tapes.

For Gregor Hildebrandt, vinyl records have been another principal medium since the early 2000s. In 2004, he came across a trend of upcycling old records into bowls. Envisioning these as 'sound bowls', the artist adapted the technique to create soaring Brancusian columns and monumental walls of stacked vinyl bowls.

In Gregor Hildebrandt's In meiner Wohnung gibt es viele Zimmer (In My Apartment, There Are Many Rooms) (2018), at Perrotin New York, walls partitioning the space were made from thousands of these stacked vinyl bowl forms. Alongside the walls of black records sourced from flea markets were other walls of custom-pressed white and coloured records.

In addition to these freestanding sculptural forms, Hildebrandt makes large-scale abstract works from square and triangular cuts of vinyl records. Begun around 2015, this series of abstract works has developed as Hildebrandt incorporates more custom-coloured vinyl records into his work. Colourful and geometric, the resultant patterns evoke Piet Mondrian, Anni Albers, and other artists from the interwar period.

In 2018, Hildebrandt established his own music label, Grzegorzki Records, and incorporates newly-released vinyl from the label in his art.

While the audio recordings stored on Hildebrandt's materials are rendered inoperable in the process of making, the songs on them are purposefully chosen to carry meaning. Songs by musicians like Einstürzende Neubauten, The Cure, Jacques Brel, Tocotronic, and Björk have been part of his life for decades, and their lyrics are often quoted in the titles of his work. Also referencing poems and films, his titles are united by their romantic narratives tinged with melancholy and loneliness.

Like any true music lover, when German artist Gregor Hildebrandt is enamored with a song he puts it on repeat. For Hildebrandt, however, the music he plays becomes the soundtrack to his prying apart, sawing, unreeling and reassembling of the last six decades’ analogue formats. In Hildebrandt’s hands, the felt pressure pads inside a...

Sign up to be notified when new artworks and exhibitions by Gregor Hildebrandt are added to Ocula.
Sign UpLogin