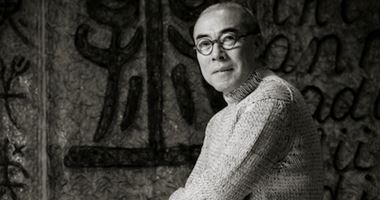 Gu Wenda is best known for his extraordinary installations comprised of human bodily substances: powdered placenta, blood, and hair. Born in Shanghai, he studied at the Shanghai Arts & Crafts School before continuing onto the Zhejiang Academy of Fine Arts in Hangzhou. The artist's early training in traditional Chinese painting laid the foundation for much of his provocative later work, which often involves the manipulation of Chinese calligraphy using the extraordinary range of media that his practice has come to be associated with.

Immediately after completing his studies in the 1980s, Gu created a series of pseudo-ideograms that resemble Chinese characters. When the works were shown at Xi'an Artists Gallery in 1986, the authorities closed the exhibition prematurely on the presumption that the illegible characters contained a subversive message; only professional artists were allowed in when it reopened. In his interview with Ocula Magazine in 2014, Gu said that his large ink paintings held 'a kind of double power: these ink works were both scholarly and socialist—they represented the two major schools of thought and authority in China at the time.' Although such works placed the artist as a major figure in the 1985 New Wave movement in China, like many of his artistic compatriots he left China for the West and now permanently resides in New York.

Gu's own experience of crossing borders and living a life outside of his own home country possibly inspired a fascination with the permeability of cultural boundaries. His most ambitious project, 'United Nations', consists of installations at sites around the world; and involves the use of human hair to create flags. The work draws attention to the tenuous nature of cultural divisions, and also presents a utopian possibility of humanity united. The work equally presents a manipulation of language and exploration and re-interpretation of traditional Chinese modes of expression—an approach that can be seen in other works by the artist, such as Forest of Stone Steles—Retranslation & Rewriting of Tang Poetry, for which the artist manipulated, juxtaposed, and layered translations and re-translations of poetry from the Tang dynasty. In Tea Alchemy and Ink Alchemy, too, the artist explored traditional Chinese materials as a means to address wider global concerns.

The Allure of Matter: Material Art from China at Los Angeles County Museum of Art (LACMA) (2 June 2019–5 January 2020) is an inter-generational show of 21 Chinese artists working from the 1980s to the present, including Ai Weiwei, Cai Guo-Qiang, Lin Tianmiao, Song Dong, He Xiangyu, Yin Xiuzhen, and Ma Qiusha.

Gu Wenda's performance is just one example of how art in the city is blooming, as the new Shenzhen Museum of Contemporary Art and Planning Exhibition nears completion and new exhibitions open at OCT Loft

I feel like I have a special relationship with Singapore, and it’s a story that’s only just beginning.

On September 3, 2016, sixteen contemporary Chinese artists will display several of their works at MoCA Shanghai as part of the museum’s new exhibition, Shanshui Within. The works will provide viewers with the artists’ unique interpretations of traditional Chinese culture and how it evolved as a result of the rapid development of...

The Prudential Eye Awards 2016 was held at the Sands Theatre at Marina Bay Sands in Singapore on 19 January 2016. Featuring 15 shortlisted artists, 39 works and an eminent panel of Judges, the event celebrates Asia’s most exciting up-and-coming talent. The awards ceremony was officiated by Grace Fu, Minister for Culture, Community and Youth...

Home-grown artists are having a strong showing at this year's Singapore Art Week, with museum shows, solo exhibitions and an increased presence at two art fairs opening simultaneously. At STPI in Robertson Quay, painter Jane Lee makes a significant departure from her large-scale paintings working with print and paper works and introducing...

Just six minutes into our breakfast conversation mid-May in Hong Kong, Gu Wenda described himself as a “troublemaker,” who “didn’t follow school requirements—even as a teacher.” I’d expected as much from an artist who made his name outside of China beginning in the late 1980s with massive installations...

Be among the first to know when new artworks and exhibitions by Gu Wenda are added to Ocula.
Sign Up Login