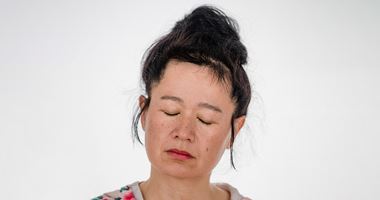 Hito Steyerl's work as a filmmaker, visual artist, writer, and innovative documentary essayist amounts to a mode that ArtReview described as 'gadfly, striking smartly from the periphery.' She was number one on their Power 100 list in 2017. Born in 1966 in Munich, this polymath first studied filmmaking at the Academy of Visual Arts in Tokyo (1987–1990) before attending the University of Television and Film in Munich (1992–1998) and writing her doctoral thesis at the Academy of Fine Arts in Vienna (2001–2003).

Steyerl currently teaches experimental film and video at the Berlin University of the Arts, where with Vera Tollmann and Boaz Levin she co-founded the Research Center for Proxy Politics. Her theoretical concerns include digital technology, its proliferation of images, and the implications of these images on society, opening up topics such as control, surveillance and militarisation, migration, cultural globalisation, feminism, and the mutability of meaning and political imagery. She combines images sourced from television, film, and the internet, to create dream-like sequences that shift between fact and fiction, with metaphors and satirical humour further mingling with reality.

November (2004) is a self-reflexive video that used the artist's first movie—a 'feminist Kung Fu film' shot in the 1980s—as its departure. The film featured the artist and her then-best friend, Andrea Wolf, who was later shot and killed in Kurdistan in 1998 as a PKK militant. The video 'examines the role of images in the post-revolutionary moment,' using the figure of Wolf to explore 'what is nowadays called terrorism and used to be called internationalism'. 'November is the time after October, a time when revolution seems to be over, and peripheral struggles have become particular, localist and almost impossible to communicate', narrates the artist. The post-revolution image is residual, continuing to circulate while political memory itself morphs and changes.

Another early work that encapsulates many of Steyerl's key concerns is Red Alert (2007), an installation of three vertical monitors that emit an identical red hue. The work references Homeland Security's terror alert system, put in place post-9/11. In an interview in ArtSlant, the artist explains that the piece was a reaction to the virtually illegible images on television capturing the American invasion of Iraq. Steyerl explains that, in response, Red Alert 'signals the end of video as a medium for representing something real; it had reached its boundaries. What we see is not an image but the medium itself. The medium is an information filter and it influences our perception.'

In Steyerl's art projects, the moving images and texts shift between fact and fiction—a notion that is furthered through her use of new technologies, such as artificial intelligence. As part of her London solo exhibition Power Plants at Serpentine Sackler Gallery in 2019, for instance, visitors were prompted to download her augmented reality app in order to visualise data related to social inequality. When directed at the gallery's signage, the app also removed the word 'Sackler' to signal the artist's opposition to the gallery's funding from the family whose firm has contributed to the United States' opioid crisis. In an Ocula Conversation, the artist states that 'even venerable public institutions like the Louvre are vulnerable, because of the growing . . . dependency of art institutions on private funding.'

Steyerl has participated in a number of group exhibitions, including Manifesta 5, Donostia-San Sebastian (2004); documenta 12, Kassel (2007); the 1st Taipei Biennial (2010); the German Pavilion of the 56th Venice Biennale (2015); Skulptur Projekte Münster (2017); and May You Live In Interesting Times at the 58th Venice Biennale (2019). Major solo exhibitions include Focus: Hito Steyerl, Art Institute of Chicago (2012); Duty-Free Art, Museo Nacional Centro de Arte Reina Sofía, Madrid (2015); Number Thirteen: Factory of the Sun, Julia Stoschek Collection, Düsseldorf (2016); The City of Broken Windows, Castello di Rivoli Museum of Contemporary Art, Turin (2018); and This is the future, Art Gallery of Ontario (2019). In 2016 the artist was awarded an honorary doctorate by the Royal College of Art in London, and in 2019 she was awarded the Käthe Kollwitz Prize.

Steyerl lives and works in Berlin.

View All (12)
Ocula Conversation Stephanie Syjuco on Rendering the Nation By Stephanie Bailey, Fort Worth

Stephanie Syjuco reflects on how her practice has evolved to focus on the lived implications of nationalism in America.

When you hear a reference to "the Armory" or "the Arsenale," are you more likely to think of an exhibition space, an art fair, a biennale—or a militarized building constructed to house a stockpile of

If somebody were to write a new Book of Revelation for the 21st century, it would read a lot like the multimedia miseries of Hito Steyerl. The 53-year-old German artist is foremost a researcher intere

Presenting a commissioned video installation and existing work by multimedia artist Hito Steyerl, Drill at the Park Avenue Armory is the Berlin-based artist's most expansive presentation in the Unit

Sign up to be notified when new artworks and exhibitions by Hito Steyerl are added to Ocula.
Sign Up Login