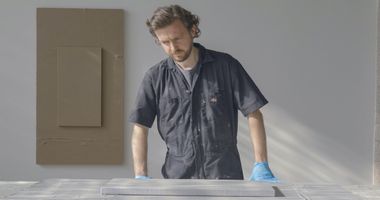 Born in Minneapolis, Minnesota, John Henderson studied in Illinois, receiving a BFA from the School of the Art Institute of Chicago in 2007 and an MFA from Northwestern University in 2009.

Shortly after graduating from Northwestern, Henderson produced Cleanings (2010), a seven-minute black-and-white video that shows the artist mopping his studio floor. While his movements echo those of Jackson Pollock painting in his studio with the canvas on the floor, Henderson's efforts were transient as the traces of water would dry after a few hours. Through a process that is both 'additive and impermanent', as described by the artist in his 2021 conversation with Ocula Magazine, he uncovered a performative and self-reflective quality that would continue in his later works.

The impermanence of Cleanings translated into John Henderson's paintings, some of which he preserves as standalone works of art and others he reproduces in new materials. In the 'Cast' series, ongoing since 2010, the artist turns his paintings into painting-sculpture hybrids by casting them in bronze or aluminium. Works titled Type are similarly cast metal paintings, in copper, made using the electrotyping process that involves duplicate plates.

In addition to casting, Henderson also employs photography to transform his paintings. 'Flowers', also ongoing since 2010, typically features a piece of paper, covered in paint, with a blurry photograph as a backdrop. For 'Proof (wall rip, verso)' (2014), the artist glued a strip of linen to the wall and removed it once dry to uncover the layers of paint and plasterboard that had been hiding behind. What he presents as the final artwork, however, is a high-resolution print of the backside of the linen. Though paint is absent in the resulting work, Henderson's reproductions of his own works are aware of the painting medium. Discussing the repetitive gestures of his method, the artist told Ocula Magazine that 'even images or objects that are flattened or compressed can continue to grow in new directions.'

John Henderson discusses the negotiations of painting ahead of his solo exhibition at Perrotin.

Be among the first to know when new artworks and exhibitions by John Henderson are added to Ocula.
Sign UpLogin