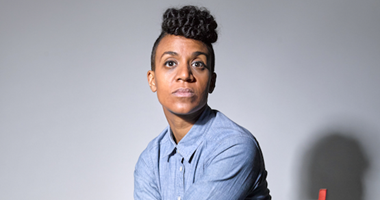 Working with sound, film, performance, and objects, Kapwani Kiwanga relies on extensive research to transform raw information into investigations of historical narratives and their impact on political, social, and community formation. The Paris-based artist’s work focuses on sites specific to Africa and the African diaspora, examining how certain events expand and unfold into popular and folk narratives, and revealing how these stories take shape in objects and oral histories. Trained as an anthropologist, Kiwanga performs this role in her artistic practice, using historical information to construct narratives about groups of people. Kiwanga is not only invested in the past but also the future, telling Afrofuturist stories and creating speculative dossiers from future civilisations to reflect on the impact of historical events.

I cannot remember what time of day it was that I was standing outside of Bétonsalon, a center for art and research in Paris. As I write this my memory is straining, trying to reconcile the two cities,

Read More
Related Press Too Big for a Booth? Art Basel Still Has Room for Your Art 11 June 2019, The New York Times

Sign up to be notified when new artworks and exhibitions by Kapwani Kiwanga are added to Ocula.
Sign UpLogin