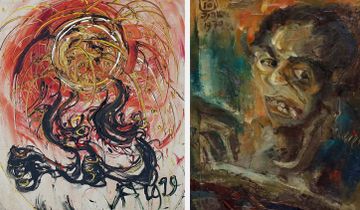 Affandi was an Indonesian artist recognised for his bold and unorthodox paintings of Indonesia in the 20th century.

Initially working as a teacher and a box-office clerk, Affandi taught himself to paint and produced advertisements for movies. In 1935, at the age of 28, the artist decided to paint seriously.

Affandi prioritised passion and authenticity over theory in his work, seeking to capture the rapidly changing reality of Indonesia through dynamic and even chaotic brushstrokes. Affandi's expressionist paintings differ from the romanticised and idealised depictions of Indonesia in the works of the Mooi Indie genre or the artist collective Pita-Maha, which was founded in 1936.

From Realism to Expressionism

Affandi's lifelong quest for authenticity is apparent in his earlier paintings, with which he attempted to reconcile traditional ideals with his perception of reality. Kartika (1941), a portrait of his daughter, for example, focuses entirely on the young girl's face to show the energy and assertion of character in her eyes—traits that the artist found disrupted the association between women and delicacy. Affandi also, however, softens the portrait by adding a flower to Kartika's head and framing her face with the curves of her hair.

Over the decade, Affandi's brushstrokes increasingly grew more painterly and expressive, conveying visceral emotions. In The Artist and His Daughter (1950), Affandi's body is relegated to the far left of the canvas, almost unrecognisable in the crude figuration of his bare foot, while Kartika stands tall in the centre. The artist's affection for his daughter is palpable in his rendition of Kartika in pastel pink and brown, yet the distance between them suggests their alienation and Affandi's loneliness as she ages.

Painting From the Tube

Affandi continued to develop his techniques, eventually painting directly from the tube and adopting a saturated colour palette to delineate tension in life in Java. Paintings such as Dogs Fighting (1964) or Cock Fighting (1965) are good examples of the artist's more mature work, in which forceful swirls of paint and bold colours make up the animals and the rowdy crowd.

Affandi is also recognised for his nude paintings, which he began in the 1940s with his wife Maryati as a model and later Kartika and others. The expressive brushstrokes and lines characteristic of his work render the nude woman in Reclining Nude (1966), while Affandi's control of the paintbrush imbues the painting with empathy and strength rather than the violence of fighting animals.

Following his first exhibition at Gedoeng Poetera, Jarkartka, in 1943, Affandi went on to exhibit internationally.

Affandi received numerous accolades in his lifetime, including the International Peace Award from the Dag Hammarskjold Foundation in 1977 and Bintang Jasa Utama (Star of Service) in 1978. Affandi Museum, dedicated to Affandi's work, was established in 1962.