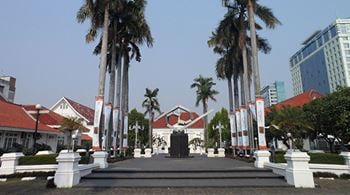 Jakarta, once known as Batavia, was the de facto capital of the Dutch East Indies during more than a couple centuries of colonial rule. The city was established as early as the 5th century and quickly became an important trading port. As Indonesia's current capital city, Jakarta's business opportunities attract people from across the island nation, bringing together many communities and cultures over centuries of rapid development. A reflection of this cultural and historical diversity can truly be felt and seen in Jakarta's vibrant art sphere.

An arts organisation called Batavia Art Circle (Bataviasche Kunstkring) was formed in 1902. A building in the centre of the city was dedicated to the art society and in the 20th century exhibited works by van Gogh, Picasso, van Dongen, Chagall, Kandinsky, Ensor, and Kollwitz as a part of an exhibition of European art commissioned by Dutch entrepreneur and art collector Pierre Alexandre Regnault.

From the late 1930s, the nation's first artist association—the Union of Indonesian Painters (Persatuan Ahli-Ahli Gambar Indonesia or PERSAGI), founded in Jakarta in 1938 by a group of Indonesian artists—criticised the European style of paintings that depicted the romantic landscapes of the Dutch East Indies. They advocated a new modern art that held a distinctly Indonesian identity and highlighted the struggle of the Indonesian people under the colonial system.

Jakarta bore witness to the birth of the Indonesian New Art Movement (Gerakan Seni Rupa Baru) in 1974. The movement sprung out of protests during the judging of the first edition of what would later be known as the Jakarta Biennale. They centred around the institutional limiting of what could constitute Indonesian fine art practice. Notable figures of the movement include artists and art-world figures, such as Jim Supangkat, Dadang Christanto, and FX Harsono, who championed installations, ready-mades, photographs, and photo-realist paintings.

In 2017, the Jakarta Biennale appointed performance artist Melati Suryodarmo as its artistic director, along with four curators from the Indonesian and international art stage.

In the southern part of the city, Ruangrupa—loosely translating to 'space for art'—is one of the leading artist-run spaces in Jakarta. It is also the name of the founding art collective that was established in 2000 and consists of Indonesian contemporary artists Ade Darmawan, Reza Afisina, and Iswanto Hartono, among others. The collective launched OK. Video—Indonesia Media Arts Festival to create a platform for a wider range of artworks than the standard art fair. This range includes digital imaging, sound art, and internet-based works, along with an exciting programme of workshops. Ruangrupa has been appointed as the curator of the 2022 edition of Documenta in Kassel. They will be the first Documenta artistic directors from the Asian region.

In addition to artist-initiated events and spaces, Jakarta is home to one of the country's most important institutions: the National Gallery of Indonesia. The museum houses over 1700 artworks by Indonesian and international artists such as Raden Saleh, Pierre Soulages, Sutjipto Adi, and Zao Wou-Ki. The most recent addition to the energetic art scene in Jakarta, The Museum of Modern and Contemporary Art in Nusantara (Museum MACAN), is the first Indonesian museum fully devoted to modern and contemporary art from Indonesia and around the world, showcasing contemporary artworks by Andy Warhol, Arahmaiani, Cai Guo Qiang, Christine Ay Tjoe, Karel Appel, Lee Ufan, Robert Rauschenberg, and Yayoi Kusama, to name a few.

Past Exhibitions In Jakarta