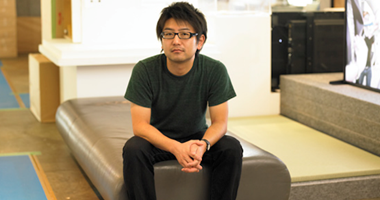 The artist mainly produces video and installation, many of which are developed site-specifically. He often deals with everyday commodities and surroundings, and recently has put more focus on everyday people’s behavior with his conceptual approach and subtle control, in order to create a visual sphere that challenges the mundane and the rational embedded in the minds of the viewers. In doing so, he lets the work entice them into a spontaneous aesthetic experience.

Tanaka was honored by being chosen to represent Japan at the 2013 Venice Biennale, where he plans to use elements of the March 2011 Tohoku Earthquake and Tsunami as a theme for the installation.

He has shown widely in and outside Japan: at the Mori Art Museum (Tokyo), Yokohama Triennale (Yokohama), the Palais de Tokyo (Paris), the Taipei Biennial (Taipei), the Asia Society (New York), the Yerba Buena Center for the Arts (San Francisco), the Museum of Contemporary Art (Los Angeles), and the Institute of Contemporary Arts (London).

Before graduating from the Tokyo University of Arts, Tanaka was Artist in Residence at Location One, New York with a support of Asian Cultural Council (ACC) fellowship. On the recommendation of Kazuhiro Yamamoto, Tanaka was awarded the Fellowship of Overseas Study Programme for Artists by the Agency for Cultural Affairs by the Japanese Government.

The 2019 Aichi Triennale (1 August–14 October 2019) is all about mediating polarisations—whether between 'nationalism and globalism, elitism and anti-intellectualism, universalism and relativism, id

My first experience of Koki Tanaka’s work was Everything is Everything (2006), an eight-channel video installation in which Tanaka films himself making abrupt gestures with everyday

Münster, in North Rhine-Westphalia, Germany, is a worthy contender for the title of bicycle capital of Europe. Visitors heading to the city's decennial event, Skulptur Projekte, saw bicycles parked or

Combining modern and contemporary artwork in the same space, The Armory Show features work from a range of media, from painting and photography to sculpture, video and installation. The Armory Show 2

Sign up to be notified when new artworks and exhibitions by Koki Tanaka are added to Ocula.
Sign UpLogin