Kwon Dae-Sup is a Korean artist known for his contemporary renditions of moon jars, a traditional form of Korean porcelain named after their round shape.

Kwon Dae-Sup discovered ceramics in 1978, when he saw a moon jar at an antique shop in Seoul. Then a painting student at Hongik University, the artist decided to pursue ceramics and moved to Japan following his graduation in 1979. There, he studied under the potter Ogasawara Chōshun IX.

Kwon has said that he was drawn to the simplicity of the moon jar, saying its shape, without any decoration, is 'the most modern, most minimal, and the most perfect abstraction.'

Since his return to Korea in the mid-1980s, Kwon has lived and worked in Gwangju, Gyeonggi Province, where the official kilns of the former Joseon dynasty remain. Paying attention to traditional procedures, he began creating his own porcelain ceramics by collecting and studying leftover shards from the kilns.

The white porcelain moon jar, known as baekja dalhangari in Korean, derives its name from its rotund shape and white glaze, which evoke the full moon. Popular in Joseon between the late 17th and 18th centuries, the moon jar is typically slightly taller than 40 centimetres. At the time, Korea celebrated the beauty of simplicity and encouraged its Seonbi, or scholarly gentlemen, to lead an accordingly humble and austere life.

Kwon Dae-Sup's moon jars retain their traditional dimensions. He begins by preparing the clay; after washing, stringing, and treading it, he shapes it on the wheel-head to create the top and bottom parts of the jar, which he then combines before firing it in the kiln.

Kwon produces around 40 moon jars each year, but ends up destroying around half of them, as they do not satisfy his search for forms that do not require any addition or subtraction. His final moon jars are deliberately imperfect, such as the visibly asymmetrical White Moon Jar (2015), maintaining a self-contained balance.

Although most known for his moon jars, Kwon also creates other porcelain ceramics that are more elongated and, at times, feature vertical lines, such as those exhibited at Seoul's Park Ryu Sook Gallery in 2019. 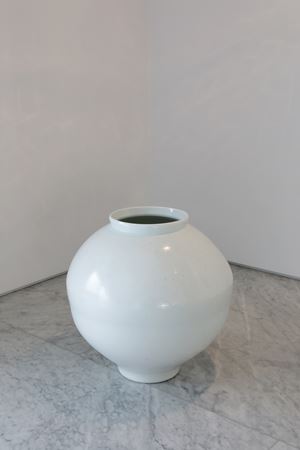 Sign up to be notified when new artworks and exhibitions by Kwon Dae-Sup are added to Ocula.
Sign UpLogin