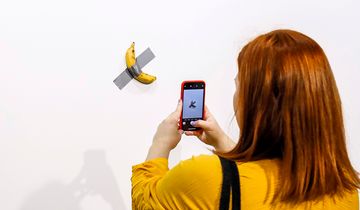 Known as the court jester of the art world, Italian Conceptual artist Maurizio Cattelan employs subversion and wit to interrogate various conditions of the contemporary world, from authority, history, and religion to the production of art and the notion of the artist.

Cattelan employs a vast range of materials for his work, including a golden toilet and even living figures. Among his most known and controversial creations is Him (2001), a lifelike wax figure incorporating the image of Adolf Hitler, and Comedian (2019), which saw the artist duct-tape a banana to a wall.

Cattelan began to gain attention in the 1990s for his early works that treat socio-political events and art world figures with subversive humour. In response to rising xenophobia in Italy, for example, the artist formed a football team consisting of North African migrant workers, who participated in regional tournaments and played football on a seven-metre table called Stadium (1991). He also inverted the power dynamics between artist and gallerist, persuading gallerists to appear in absurd situations at his exhibition openings, such as having Emmanuel Perrotin wear a phallic rabbit costume (Errotin, le vrai Lapin, 1995) or Massimo De Carlo duct-taped to the gallery wall (A Perfect Day, 1999).

Cattelan engages historical and public figures in projects that have at times sparked controversy. One such work, La Nona Ora (The Ninth Hour) (1999) is a life-like resin sculpture of Pope John Paul II struck down by a meteorite. While it has been interpreted as a critique of the Catholic Church's scandals and hypocrisy, it could also be read as considering the ideas of resilience and suffering. Him (2001), a sculpture made out of wax, is meant to be approached from behind, where it first appears to be a young boy kneeling on the floor. Viewed from the front however, Adolf Hitler's face emerges.

For his first solo exhibition in 1989, Maurizo Cattelan put up a sign that read Torno subito ('Be back soon') in lieu of a gallery filled with artworks. This anxiety in presenting orthodox exhibitions has become a running theme in his practice, in which he simultaneously subverts traditional modes of artmaking and art-exhibiting. When participating in a show at the Castello di Rivara in 1992, Cattelan knotted bed sheets into a rope and hung it from an open window, giving the impression that the artist had fled the site (Una Domenica a Rivara). This was followed a year later by Working is a bad job (1993) at the 45th Venice Biennale, where the artist contracted a perfume company to advertise their products in his allocated space.

Cattelan's own image has not been exempt from his satire. In La Rivoluzione siamo noi (2000), a polyester resin sculpture depicting himself—with a slightly oversized head—hangs from a clothing rack. The work was originally exhibited at the Migros Museum, Zurich, where it occupied the exhibition space all by itself. The self-reference takes a more allegorical form in Daddy, Daddy (2008), in which Disney's Pinocchio floats face down in a body of water, apparently having fallen to his death. By taking the wooden puppet Pinocchio—a frequent liar who seeks to become something he is not (a human)—as a surrogate image of himself, Maurizo Cattelan ironically nurtures persisting doubt about his status as an artist.

In 2011, Cattelan announced his retirement at the same time as a retrospective exhibition of his work opened at New York's Solomon R. Guggenheim Museum, although he has since returned to further present works that poke fun at the art world. America (2016), a fully functioning toilet made out of gold, was first installed for almost a year at the Guggenheim; it was subsequently stolen while exhibited at Blenheim Palace in Oxfordshire, England (2019). Later that year, Cattelan famously duct-taped a banana to a wall at Art Basel in Miami Beach and titled it Comedian. It attracted international publicity a second time when performance artist David Datuna removed the banana (sold in three editions for between $120,000 and $150,000) and ate it.

Maurizio Cattelan has exhibited internationally since the 1980s, holding solo presentations and participating in group shows in major institutions across the world.

View All (5)
Ocula Photolog Maurizio Cattelan: The Last Judgment at UCCA, Beijing The Last Judgment is the first solo exhibition in China by Maurizio Cattelan, one of the most popular and controversial figures on the international contemporary art scene. Taking its title from Michelangelo's fresco in the Sistine Chapel, this exhibition is a focused overview of the artist's more than three decades of often provocative...