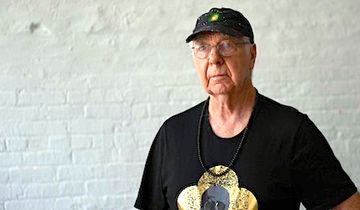 As one of New Zealand's most colourful expatriates, Max Gimblett holds a unique place in contemporary New Zealand art. He was born in 1935 in Auckland and moved to North America in his late 20s, first studying drawing at Ontario College of Art (1964) and then painting at the San Francisco Art Institute (1965). Based in New York since 1972, he visits and works in Auckland regularly. Gimblett is best known for his gestural paintings and quatrefoil canvases that combine various Eastern and Western sources as a way of expressing spirituality.

Gimblett's gestural paintings stem from his profound interest in Japanese religious beliefs and calligraphy. Kenneth Patchen (1911–1972), the American poet whose Zen ink drawings Gimblett first encountered in 1966, was particularly influential on Gimblett's nascent ink-based works. An ordained Rinzai Zen Buddhist himself, Gimblett's work cites Zen principles of reconciling opposites, as manifested in the juxtaposition of calligraphic lines with a geometric canvas. His process of painting—during which he engages his entire body in the work while shouting or pausing to clap—also borrows the idea of Mind from Zen Buddhism. Described as 'ALL MIND NO MIND' by the artist, the approach attempts to suppress the mind from rationalising during the act of painting.

At the same time, however, Gimblett also identifies himself as a Modernist. His bold gestures evoke Willem de Kooning as much as they do Japanese calligraphy. Wassily Kandinsky's vision of Modernism, which emphasises the link between painting and spirituality and communal values, has long been integral to Gimblett's practice. He considers art not as a commodity but as a potent agent in service of the community, remarking in a 2014 interview with Ocula Magazine that 'Art stands for the truth and feeds people with spirit.'

A defining characteristic of Gimblett's work is his use of geometric shapes as supports. Produced since the 1980s, his quatrefoil canvases deny the notion of the canvas as a window, presenting them as spiritually charged fields. Gimblett views the quatrefoil as 'a symbol of wholeness', standing for the most sacred in both Eastern and Western religions. The tondo is equally popular in his oeuvre, and he exhibited a series of gestural paintings on circular canvases as part of group exhibition Full Circle (2013–14) at Gow Langsford Gallery, Auckland.

Gimblett's use of precious metals further affirms his interest in symbolic materials referencing spiritual beliefs. Gold and silver are historically associated with light, vitality, wisdom and enlightenment. Applied as gestural marks or over the whole of the canvas, the metals not only allow for bold colours but also create highly reflective surfaces.

Since his first solo exhibition in 1971 at A Clean Well Lighted Place in Austin, Texas, Gimblett has exhibited widely in the United States, Europe, Asia, Australia and New Zealand. In 2004, Auckland Art Gallery Toi o Tāmaki organised The Brush of All Things—a major survey exhibition including numerous Gimblett works from private and public collections. Four years later, he was part of the Solomon R. Guggenheim Museum's group exhibition The Third Mind: American Artists Contemplate Asia, 1860–1989. His work is in the permanent collection of Auckland Art Gallery Toi o Tāmaki; Museum of New Zealand Te Papa Tongarewa, Wellington; the Solomon R. Guggenheim Museum, New York; The Museum of Modern Art, New York; the Whitney Museum of American Art, New York; and the National Gallery of Australia, Canberra. Gimblett was appointed as Honorary Visiting Professor to the National Institute of Creative Arts and Industries at the University of Auckland in 2005.

Adrian Burr and Peter Tatham's art collection will be sold by Art+Object and it could be New Zealand's most lucrative art auction ever.

I do not see art as pertaining to the market place, but rather creating change conditions for the citizens of our world, all eight billion of us. Art stands for the truth and feeds people with spirit.

Max Gimblett's highly successful career as an artist was in limbo for 20 years while a butterfly waited for wings. He tells the story to Diana Dekker. Somewhere, probably, there is a tall Maori man