About Whitney Museum of American Art

As the preeminent institution devoted to the art of the United States, the Whitney Museum of American Art presents the full range of twentieth-century and contemporary American art, with a special focus on works by living artists. The Whitney is dedicated to collecting, preserving, interpreting, and exhibiting American art, and its collection--arguably the finest holding of twentieth-century American art in the world--is the Museum's key resource. The Museum's signature exhibition, the Biennial, is the country's leading survey of the most recent developments in American art.

Innovation has been a hallmark of the Whitney since its beginnings. It was the first museum dedicated to the work of living American artists and the first New York museum to present a major exhibition of a video artist (Nam June Paik in 1982). Such figures as Jasper Johns, Cy Twombly, and Cindy Sherman were given their first museum retrospectives by the Whitney. The Museum has consistently purchased works within the year they were created, often well before the artists became broadly recognized. The Whitney was the first museum to take its exhibitions and programming beyond its walls by establishing corporate-funded branch facilities, and the first museum to undertake a program of collection-sharing (with the San Jose Museum of Art) in order to increase access to its renowned collection.

Designed by architect Renzo Piano and situated between the High Line and the Hudson River, the Whitney's new building vastly increases the Museum’s exhibition and programming space, providing the first comprehensive view of its unsurpassed collection of modern and contemporary American art. 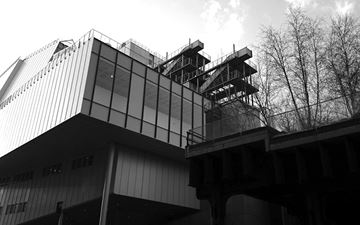 Dawoud Bey on photography as portraiture of history and capturing the legacies of African-American landscapes.

The 2022 Whitney Biennial takes the pulse of contemporary art in America.

Be among the first to know when new artworks and exhibitions at Whitney Museum of American Art are added to Ocula.
Sign Up Login