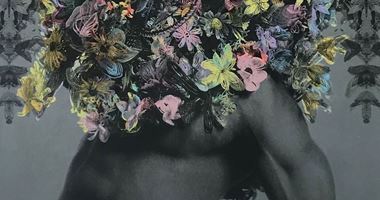 Nick Cave is an American artist known for his 'Soundsuits': full-body sculptural forms characterised by their use of everyday and discarded materials that include synthetic fur, buttons, sequins, beads, crystals, figurines, and doilies. Through his often exuberantly coloured and noise-inducing creations, Cave offers a playful yet unrelenting investigation into problems ranging from racial violence and gender inequality to American gun violence and global warming.

Nick Cave created his first Soundsuit in 1992, using twigs gathered the park. He told T Magazine in 2019 that the work was in response to the police beating of Rodney King in 1991, as well as the artist's sense of isolation from his predominantly white colleagues at the School of Art Institute of Chicago. The suit covered the wearer's entire body, offering protection—by hiding superficial identity signifiers such as race, gender, and class—while commanding attention with its noisy and conspicuous design.

Many Soundsuits are wearable and employed in performances that draw from Cave's training at Alvin Ailey American Dance Theater in New York in the 1980s. In 2018, the artist organised two performances at the city's Park Avenue Armory: Up Right, in which performers wearing Soundsuits made a tribute to self-determination, and The Let Go, which invited audience participation.

Cave draws inspiration from a vast range of objects and iconography. The mitre-hat shaped Soundsuits originate from his exploration of 'ideas of power'. Their imagery includes Ku Klux Klan uniforms, missiles, and condoms, as Cave reveals in a video for the Smithsonian American Art Museum. Several Soundsuits are made from second-hand ceramic flowers and birds. Cave employs such materials, found in thrift stores and flea markets, to examine the process of restoring value.

Cave also creates sculptures and installations that address historical and contemporary issues of systemic injustice and racial inequality in the United States. Made By Whites For Whites (2014)—his solo exhibition at New York's Jack Shainman Gallery—presented installations made from found objects that reflect racially charged representations of African Americans. In 2016 at MASS MoCA, Massachusetts, Cave showed Until: a massive installation 18 feet off the ground—accessible by ladders—that offered a portrayal of an America fraught with gun violence and racial and gender disparity through an explosive assortment of ceramic birds, gilded animals, netting, and crystals.

For EXPO CHICAGO 2020, Nick Cave and Bob Faust, his partner and also an artist, created Facility (2019): a limited-edition print depicting a body wearing an elaborate headdress reminiscent of Cave's Soundsuits. In a conversation for Ocula Magazine, published in partnership with EXPO CHICAGO, the artists discussed the process of transforming sculptural objects such as Soundsuits into a photographic image. Faust noted that the contrast of the naked torso and heavy headdress 'lets us enter the complicated chemistries of strength and beauty, as well as vulnerability'.

Nick Cave: Feat., a survey exhibition of Cave's work, was organised in 2017 by the Frist Art Museum, Nashville, with partial support from the National Endowment for the Arts. Over the course of three years, it travelled to the Orlando Museum of Art, Florida; Akron Art Museum, Ohio; Glenbow Museum, Calgary; and the Mississippi Museum of Art, Jackson.

On advocacy and structural inequity.

Related Press Nick Cave Is the Most Joyful, and Critical, Artist in America 18 October 2019, The New York Times

Using materials that range from twigs to crystals to rainbow-colored hair, the artist makes sculptures that, for all their beauty, are visceral and necessary critiques of racial injustice.

Be among the first to know when new artworks and exhibitions by Nick Cave are added to Ocula.
Sign Up Login