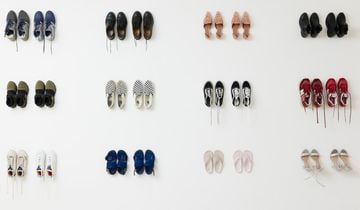 Displacing and re-contextualising familiar objects into unusual settings, artist Paola Pivi channels a sense of playfulness and comedy through her sculptures, photographs and installations.

Pivi originally set out to be an engineer. However, when she was in her 20s, she was encouraged to pursue art full-time by a teacher at the Academy of Fine Arts of Brera in Milan. Following what she believed would provide both excitement and satisfaction, the artist began paying close attention to the subconscious visions she had of ordinary things in impossible places.

Pivi's first shown artworks in the late 1990s demonstrated a fascination with turning industrial objects into things of beauty. Among these were Camion (1997)—an 18-wheeler semi-trailer truck turned on its side—and Untitled (airplane) (1999)—a Fiat G-91 fighter jet flipped upside down, presented in her installation at the Venice Biennale that won the coveted Golden Lion award later that year. 'What I'm doing is manipulating things that people think can't be manipulated', the artist explained to the Observer in 2012. Continuing the motif of the defunct airplane, Pivi displayed How I Roll—a spinning Piper Seneca plane—in Central Park in New York City in 2012.

Pivi believes that every human being has a memory of a past when we were closely connected with animals. Beginning with her 2003 artwork Untitled (Ostriches), the artist began using animals to create scenes that often only hold up in the realm of fantasy, such as putting living goldfish on airplanes, zebras on snowy mountains, and a leopard in a room with 3,000 cappuccino cups. Pivi commemorates the absurd staged events with photographs or live performances, allowing her daydreams—or nightmares, depending on the viewer—to be presented in exhibition spaces.

In many ways, the animals that often feature in Pivi's work seem human-like, their anthropomorphism revealing commonality between man and beast. However, Pivi reminds viewers that this kinship has been eviscerated in our attempts to conquer what scares us and exert the authority of man over nature. Splayed fake bear skin rugs—as seen in What goes round—art comes round (2010)—and feathered urethane foam polar bears that appear to have been taxidermied—as seen in Mama no more diapers, please (2013)—function as visually evocative depictions of our forced dominance: a vulgar chew at our relatives as we resist their upper hand.

Over the years that she has been working, Pivi has remained intent on surprising the viewer. For instance, Thank You ocean (2003)—a work composed of multi-layered strings of pearls inspired by time she spent living in Shanghai—demonstrates the artist's creative use of texture and a material associated with wealth and opulence. The pearls also provoke a desire to touch and to feel—a craving associated with infantile behaviour of fearless sensory exploration.

Pivi has exhibited her work internationally and has been collected by important art institutions around the globe, including solo exhibitions at The Bass Museum of Art in Miami Beach, Florida, and the Savannah College of Art and Design (SCAD) in Georgia. Pivi's work can be found in the collections of the Solomon R Guggenheim Museum, New York, and the Centre Pompidou, Paris, among others.

In 2007, Italian artist Paola Pivi brazenly preempted her audience’s response to a work by titling it, If you like it, thank you. If you don’t like it, I am sorry. Enjoy anyway.  The name suggests that viewers are able to enjoy the piece regardless of how they judge it. Indeed, Pivi’s often spectacular work is easy to...

Be among the first to know when new artworks and exhibitions by Paola Pivi are added to Ocula.
Sign Up Login