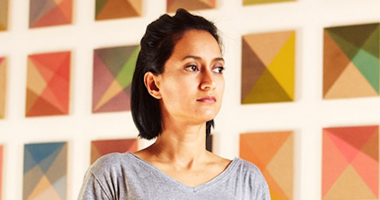 Rana Begum is an Anglo-Bangladeshi contemporary artist who experiments with the boundaries between painting, design, and architecture. She is influenced by both Minimalism and her childhood experiences of Islam and Islamic art and architecture. Born in Sylhet, eastern Bangladesh, the artist moved to England when she was only eight years old. She now lives and works in London and describes it as a city that is 'constantly morphing and changing'. She combines her early childhood's sense of steady repetition and calm contemplation with urban structures and industrial materials to create a conversation between form, colour, and light. The artist finds inspiration in her childhood memories of light hitting the water in Bangladesh's rice fields, as well as the ritual of praying five times a day.

Initially Begum's works were representational, but as she became exposed to artists such as Ellsworth Kelly and Sol LeWitt, she carried her interest in line, colour, and light towards an abstracted exploration of repetition and materiality. During her Masters degree, the artist gained inspiration from Latin American artists including Jesús Rafael de Soto and Hélio Oiticica, and Constructivist artists such as Charles Biederman. She introduced colour and light slowly into her works, determined to approach these complex phenomenona with care. The quietly intense process of concentration with which she treats each level of her artistic process allows the work to act not as spectacle, but instead quietly grab the viewer's attention until he or she is immersed in the work's own elucidation of time.

Begum's highly geometric sculptures are both static and in constant flux. That is, though the physical artworks themselves stand still, as the light changes within the space throughout the day and as the viewer moves around the artwork, bright colours may turn to more subdued tones and short and sharp shadows may enlarge and fade. In an interview with Stephanie Bailey for Ocula Magazine, the artist stated: 'In life we are in constant motion, seeing things change and shift around us. I felt the need to reflect these transitions and changes within my work.' In this way, the moving viewer activates the work and may experience a new moment at each angle.

Though London provides a great deal of inspiration to Begum, equally influential are the many residencies the artist has undertaken in cities like Bangkok and Beirut. During these residencies, the artist develops her art in reaction to the new environments in which she finds herself, absorbing each unique context and incorporating it into her style and process. In a 2009 residency in Beirut, she took inspiration from the city's skyline to make sculptural drawings with straws from a Lebanese corner shop. She has since extended this exploration, replacing straws with steel and pairing the steel with reflective sheets placed on the wall or the floor.

In 2016, Begum won the Abraaj Group Art Prize, for which she was awarded $100 000 to realise a project for Art Dubai 2017. The exhibition that accompanied this prize, curated by Omer Berrada, brought together works by three other shortlisted artists and Begum's commissioned work. In the commissioned work, the artist developed her conversation between light and colour by extending a series of painted MDF studies into a three-dimensional transparent glass installation. A monograph written and produced by Berrada was also published.

Begum's work acts architecturally in reaction to both the exhibition space and its broader environmental location. She reflects on moments where she is able to find 'unexpected silence amidst the clamour' of the urban environment, taking readily available industrial materials and presenting them in patterns and forms that reflect the feeling of infinity found through meditation. In this way, the artist blends past memories and present context to dissect questions of materiality and form.

It has been said before that my work creates illusions in colour and light, but actually it really has nothing to do with illusion. The work reveals itself as you interact with it, communicating the material from which it is made and the way the colour is used—it’s not hiding anything.

At Frieze art fair next week, among thousands of artworks, it will be difficult for any one artist to stand out. But the sensual beauty and formal rigour of the works of Rana Begum, the British-Bangla

The fifth installment of NMWA's Women to Watch exhibition series, Heavy Metal, is presented by the museum and participating national and international outreach committees. The exhibition showcases

The London-based Bangladeshi artist, an alum of Chelsea College of Art & Design and the Slade School of Fine Art, was awarded the coveted prize last October, receiving a bursary of $100,000 to realise

Be among the first to know when new artworks and exhibitions by Rana Begum are added to Ocula.
Sign UpLogin