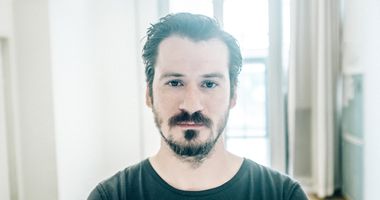 Mircea Suciu is a visual artist born in 1978 in Baia Mara, Romania. Suciu works predominantly with acrylic, charcoal, and oil with recycled and restored images.

Suciu's images are stressed at various points to capture the passage of time. They reflect the artist's ongoing interest in the psychological undercurrent of history and a childhood spent in political unrest under the dictatorship of Nicolae Ceaușescu culminating in the 1989 revolution.

Suciu's earliest influences draw from Amedeo Modigliani and the School of Paris. During his formative years, the artist learned about etching, painting, and restoration in Sicily and Palermo where he assisted in the restoration of Baroque painting. These techniques would be recovered to create poignant images using a layered process unique to the artist.

Replication and revision are prominent within the artist's process, while mass-disseminated images pervade the body of work. After graduating from the University of Art and Design in Cluj, Romania, in 2001, Suciu went on to pursue a career in advertising. From there, the artist took to repurposing news imagery and approaching image-making in a 'logical way'.

Suciu's paintings are commonly attributed to the Cluj School associated with Victor Man, Adrian Ghenie, and Marius Bercea. Despite being friends, the four displayed very different styles of painting. They exhibited together at a time when Romania was devoid of an art industry and the name, attributed by the founder of Flash Art, Giancarlo Politi, stuck despite the absence of further commonality.

Monotype: a Process of Historical Transference

The historical medium of painting is used by Suciu to mine images across time, using history itself as a medium to consider the future. Suciu's canvases are heavy with historical weight, holding on to the legacy of art history while expressing an eagerness to expand the medium.

As the artist explained in conversation with Tessa Moldan for Ocula Magazine, 'All our mistakes build history, and we evolve because of our mistakes. My philosophy about humanity and evolution is encoded in my process.' Suciu's monotypes are made by transferring images to the canvas using plastic printed sheets. Ultimately, this process enables the artist to arrive at as strong an image as possible. Once the image is transferred to canvas, it is built up with an emphasis on certain compositional elements.

Responding to the Present

In more recent works, as seen in the artist's exhibition Bleeding Heart at Zeno X Gallery, Antwerp (1 September–23 October 2021), paintings like Diego Velázquez's Las Meninas are replicated and altered to allude to the colonial history of the United States and the social and political tensions that have materialised as a consequence. Against changing modes of representation, Suciu is concerned with making art that remains honest—the kind of image that is not only desired, but necessary and entangled in the social landscape it addresses.

Mircea Suciu has exhibited at major institutions such as the Kunstmuseum Bochum, Germany; the Weserburg Museum in Bremen, Germany; the Museum Beelden aan Zee in The Hague, The Netherlands; MODEM Center for Modern and Contemporary Art in Debrecen, Hungary, and the Műcsarnok Kunsthalle in Budapest, Hungary.

Suciu's exhibition record also includes biennial attendances, amongst which the 4th Prague Biennial, the 11th Istanbul Biennial, and the 16th Vilnius Painting Triennial. Existing collectors include the Fondation Francès Senlis in Paris and The Recent Art Museum in Bucharest.

More works can be found here, and Mircea Suciu's nstagram is available here.

With his latest solo show now on view at Zeno X Gallery, Mircea Suciu discusses his approach to capturing the psychological undercurrents of now.

Be among the first to know when new artworks and exhibitions by Mircea Suciu are added to Ocula.
Sign UpLogin