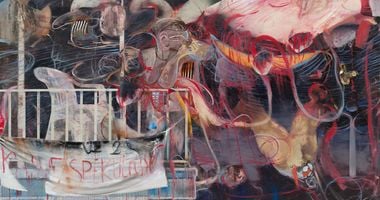 Based in Berlin, Adrian Ghenie is a Romanian artist whose contemporary paintings fuse the figurative and the abstract, drawing on deep, dark personal and historical states of mind.

Born in 1977 in Baia Mare, Romania, Adrian Ghenie studied at the University of Art and Design in Cluj-Napoca, Romania, graduating in 2001. After working as an artist in Vienna and Sicily, he returned to Cluj to establish Galeria Plan B with Mihai Pop in 2005. Initiated as a platform for the presentation of contemporary Romanian artists, the gallery opened its second space in Berlin in 2008.

The Romanian painter borrows stylistically from across the art historical canon, from the sombre, dramatic chiaroscuro of Renaissance painting to the Abstract Expressionists' experimentations with texture and surface.

The use of a palette knife instead of a brush forms the basis of Adrian Ghenie's oil painting technique: pouring and dripping paint and making broad marks with the knife on the painted surface. The resulting oil paintings combine realistic, figurative elements with varying degrees of fragmentation and abstraction. His style has been compared to Francis Bacon.

Historical Muses: From Hitler to Duchamp

The intensity of the abstraction is tied to the subjects of the artist's works. A complex interplay between the historical and the personal, Adrian Ghenie's paintings examine the psychological state of individuals, principally figures of historical influence.

Among Ghenie's historic subjects include instigators of great suffering, such as Hitler, Lenin, Nicolae Ceausescu, and Nazi war criminal, Josef Mengele. Others of a less violent persuasion include groundbreaking figures such as evolutionary scientist Charles Darwin and artists like Vincent van Gogh and Marcel Duchamp.

Ghenie's distinctive practice quickly stood out on the international art scene, attracting the attention of institutions and influential collectors. Since first appearing at auction in 2011, Ghenie's oil on canvas paintings have rapidly increased in value on the secondary art market. Nickelodeon (2008), an ominous two-part painting acquired by François Pinault in 2009 for approximately €60,000, sold at Christie's for £7.1 million just seven years later.

On Ghenie's development as an artist since his solo exhibition at Galerie Judin back in 2007, Juerg Judin explains to Ocula Advisory, '...you realise that an incredibly intelligent but equally courageous painter has steadily intensified his goal of achieving great narratives with ever more abstraction'. ⁠

Alongside various solo and group exhibitions in galleries and institutions across Europe and America, Adrian Ghenie has participated in numerous international biennials, including the 56th Venice Biennale in 2015, where he represented Romania.

A 2021 solo exhibition of Ghenie's recent works, We Had Everything Before Us, is running at Galerie Judie, Berlin, from 1 May through to 10 July.

Be among the first to know when new artworks and exhibitions by Adrian Ghenie are added to Ocula.
Sign Up Login