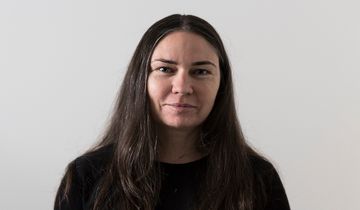 Yhonnie Scarce is an Australian artist and descendent of the Kokatha and Nukunu peoples, known for her glass-based sculptures and installations that address the lingering effects of colonisation on modern-day Australia.

Combining research, archival material, and family history, Scarce brings attention to the historical displacement and exploitation of Aboriginal peoples as well as the discrimination that continues to affect Indigenous communities in contemporary Australian society.

Yhonnie Scarce's hand-blown glass sculptures often assume the shape of bush food, serving as a conduit through which the artist addresses the lesser-known aspects of Australian history. The large-scale installation Thunder Raining Poison (2015), for example, references the British nuclear tests at Maralinga in the 1950s through a cascade of more than 2,000 glass yams suspended from the ceiling. In Strontium — 90: Fallout Babies (2016), presented at Sydney Contemporary, Scarce places glass bush fruits in cribs to demonstrate the generational impact of the nuclear tests on Aboriginal communities, including her grandfather's and her own Kokatha Country.

In 2019, Yhonnie Scarce and the architecture studio Edition Office were awarded the National Gallery of Victoria Architecture Commission to present their collaboration In Absence at the NGV, Melbourne. Measuring 9 metres in height, the installation is a black wooden tower with an opening in the middle and reflective, black glass yams on its inside walls. The structure of In Absence evokes the traditional built structures and eel traps long employed by Indigenous communities, while its complex, glittering interior critiques the imperialist claim of terra nullius that served to justify the British colonisation of Australia.

In the dead house, conceived for the 2020 Adelaide Biennial of Australian Art: Monster Theatres, is an installation of 30 glass bush bananas staged at the Adelaide Botanic Gardens inside the Dead House, a stone structure that once acted as a mortuary. The bananas, rendered in semi-opaque white with fissures on their sides, were lined along tables and carts as if they were scientific specimens or organs on display. The artwork invokes the history of the Dead House, where the Scottish coroner William Ramsay Smith allegedly misused human remains in the mortuary, including those of Aboriginal peoples.

In 2019, Yhonnie Scarce and Claire Watson co-curated Violent Salt, a group exhibition that examines the prejudice and discrimination experienced by First Nation peoples and marginalised communities in Australia. Launched at Artspace Mackay, Queensland, Violent Salt is scheduled to tour Australia throughout 2021.

Yhonnie Scarce has presented her work in Sydney Contemporary (2018), Sydney Biennale (2014), and the Venice Biennale (2013). Yhonnie Scarce: Missile Park, a major survey of her work, opened at the Australian Centre for Contemporary Art (ACCA), Melbourne, in March 2021. Jointly organised by ACCA and Brisbane's Institute of Modern Art, it considers the past fifteen years of Scarce's practice.

THIS IS NO FANTASY Melbourne

At the Seoul Museum of Art, an invitation to rethink Australia through contemporary art unfolds across mediums.

Yhonnie Scarce reflects on the themes running through her solo exhibition at the Australian Centre for Contemporary Art, Missile Park.

" Imagination is the beginning of creation. You imagine what you desire, you will what you imagine and at last you create what you will." George Bernard Shaw In 1879, a French postman named Ferdinand Cheval began building an esoteric homage to the beauty of sandstone. On one of his postal rounds, Cheval came across small pieces of...

Congratulations to Yhonnie Scarce who has taken out the 2018 Indigenous Ceramic Award (ICA) with her porcelain and glass work, Servant and Slave, 2018. The $20,000 award is acquisitive and Scarce's

As Australia's leading art fair, Sydney Contemporary manages to make art critics into art lovers and the unanointed into worshippers, all within the space of three days.

'Sovereignty' is a call to the present and to the future, and a powerful call at that.