About National Gallery of Modern Art

The idea of a national art gallery to germinate and bear fruit was first mooted in 1949. It was nurtured carefully by Prime Minister Jawahar Lal Nehru and Maulana Azad, sensitive bureaucrats like Humayun Kabir and an active art community. Vice-president Dr S Radhakrishanan formally inaugurated the NGMA in the presence of Prime Minister Jawaharlal Nehru and artists and art lovers of the city on March 29, 1954. The choice of Jaipur House, one of the premier edifices of Lutyens’ Delhi, signified the envisaged high profile of the institution. Designed by Sir Arthur Bloomfield, as a residence for the Maharaja of Jaipur, the butterfly-shaped building with a central dome was built in 1936. It was styled after a concept of the Central Hexagon visualised by Sir Edwin Lutyens. It was Lutyens, along with Herbert Baker, who visualised and gave shape to the new capital in Delhi. Along with buildings designed for other princely potentates like Bikaner and Hyderabad, Jaipur House girded the India Gate circle. The famous architect conceptualised a harmony of facades giving the buildings a distinctive character.

NGMA’s inauguration was marked by an exhibition of sculptures. All the prominent sculptors of the time like Debi Prasad Roy Chowdhury, Ramkinkar Baij, Sankho Chaudhuri, Dhanraj Bhagat, Sarbari Roy Chowdhury and others had participated. The show spoke of the painstaking preparations made by NGMA’s first curator Herman Goetz. A noted German art historian, Goetz had earlier been responsible for setting up the Baroda Museum.Since Goetz’s tenure, NGMA has had a string of distinguished directors.

The Gallery is the premier institution of its kind in India. It is run and administered as a subordinate office to the Department of Culture, Government of India. The NGMA has two branches one at Mumbai and the other at Bangaluru shortly. The gallery is a repository of the cultural ethos of the country and showcases the changing art forms through the passage of the last hundred and fifty years starting from about 1857 in the field of Visual and Plastic arts. Notwithstanding some gaps and some trivia, the NGMA collection today is undeniably the most significant collection of modern and contemporary art in the country today.

Above all, the National Gallery of Modern Art helps people to look at the works of modern art with greater joy, understanding and knowledge by extending their relationship with our daily life and experiencing them as vital expressions of the human spirit. 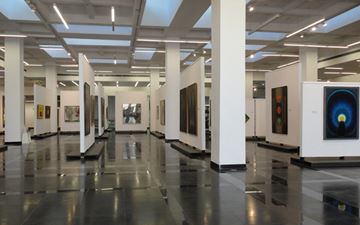