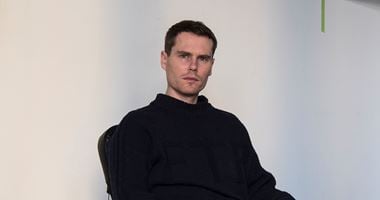 Zac Langdon-Pole's photographic and sculptural practice of found and fabricated artefacts traverses a range of scales from the familial to the celestial, all connected by the artist's interest in memory, translation, and the ordering of social and natural worlds. After gaining a Bachelor of Fine Arts from Elam School of Arts, the University of Auckland, in 2010, Langdon-Pole received a Master of Arts from Frankfurt's Städelschule, Staatliche Hochschule für Bildende Künste in 2015. In a move that exemplifies his abiding concern with extending the limits of artistic authorship, the artist enlisted—for his final graduating project—his then professor, Willem de Rooij, to photograph a relatively unknown waterfall at the south end of Cooks Beach, on the Coromandel Peninsula.

My Body ... (Brendan Pole) (2015) consists of a poem re-written by the artist based on a recollection by his mother, Cathy Pole, of a poem her brother Brendan Pole recited in 1991, shortly before he died of HIV-related complications. The work consists of two hundred and ninety-seven photographs of illuminated medieval manuscript characters, which form the poem's individual letters, shuttling between image and text. Gloss (1. - 6.) is an accompanying series of images, cropped from a single family photograph onto which six footnotes have been de-bossed to expand on certain images and lines from the poem. In 2016, the artist developed a third component to the project for La Biennale de Montréal by selecting 'care-takers' to recite the original poem, along with a newly-commissioned French translation upon a gallery visitor's requests.

Langdon-Pole's 'Punctatum' series comprises wooden furniture items shipped from his family home in Aotearoa New Zealand. Once infested with borer beetle (Anobium Punctatum) larvae, the objects have had their tunnels filled with gold as an act of care and restoration that avoids effacing the objects' history as carriers of an invasive foreign threat, once stowed away in chattels brought by European colonists to the South Pacific.

In 2018, the piece and soon the landscape lost all variety extended the act of relocation by taking gallery visitors on a ten-minute walk through Ghent's Citadel Park as part of the artist's exhibition at S.M.A.K. The route led to a local flower shop where visitors were given a free copy of the local newspaper, in which the artist had rented advertising space to re-publish Marguerite Duras' 1957 article, The Algerian's Flowers in the original French, with English, Arabic, and Dutch translations. The text is Duras' eyewitness account of plainclothes police officers harassing a young Algerian man for attempting to sell flowers without a permit on a street corner—not dissimilar to the one the participants in Langdon-Pole's project found themselves choreographed onto.

The 'Passport (Argonauta)' series invokes one of the oldest thought experiments in Western metaphysics, which poses the progressive refurbishment of Theseus' ship as a question on the foundations of 'being' and 'identity'. This suite of work, first presented at Art Basel Hong Kong in 2018, consists of nine unique meteorite fragments handcrafted to fill the apertures of delicate Paper Nautilus Shells, made by the genus of Octopedes known as Argonauts. Here Langdon-Pole's interest in transformation across time and space—and its varying orders of magnitude—manifests in these shaped, polished, and etched objects whose surfaces hint at age-old geological processes.

In 2018, Langdon-Pole was awarded the BMW Art Journey for which he undertook a fully-funded research trip along the earth's axis through Western Europe from London to the Netherlands and France, through the Pacific Islands of Samoa and Hawai'i and the Marshall Islands, ending in his country of birth, Aotearoa New Zealand. His winning proposal, Sutures of the Sky, was structured in part by the flight paths of migratory birds to create an itinerary for the artist's research. Among the project's numerous inquiries was an interest in celestial mapping as a kind of 'ground zero of meaning-making and storytelling'. This focus led the artist on a sprawling search that traced how people have mapped the stars and conceived their environment for millennia. Throughout his travels, Langdon-Pole consulted local scholars, artists, and sailors while using writing, photography, and film to develop and record his many collaborations. A solo presentation of new work resulting from his travels on the BMW Art Journey will be presented at the 2019 edition of Art Basel Miami—accompanied by a multi-authored monograph.

Pandemic permitting, the Hong Kong artist will visit destinations in Europe, Japan and the Americas to explore the past, present and future of materials.

Zac Langdon-Pole discusses his project realised through the BMW Art Journey prize, which departed from the migratory flight lines of birds to explore imperialism's lasting presence.

'My interest in celestial mapping is as a kind of ground zero of meaning-making and storytelling', starts Zac Langdon-Pole. 'Connecting the stars and making constellations out of them often tie to ori

Art Basel announced that the New Zealand-born, Berlin-based artist Zac Langdon-Pole has been named the next winner of the BMW Art Journey. An international jury unanimously selected Langdon-Pole from

This is an unusual installation worth spending serious time thinking about after you’ve left.

Sign up to be notified when new artworks and exhibitions by Zac Langdon-Pole are added to Ocula.
Sign Up Login