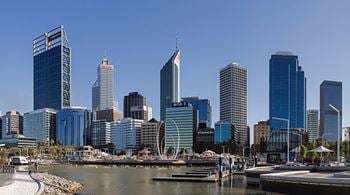 Perth is the capital city of Western Australia—the state with the largest geographical reach in Australia. The Noongar people are the traditional owners of the Perth region and wider Swan Coastal Plain. The area's main industry and source of population growth is through the mining of natural resources. Perth is located in close proximity to other nearby townships such as Fremantle or Freo, as it is affectionately known, which also hosts a slew of creative activity.

Despite its regionality and reputation as one of the most remote cities in the world, Perth has a vibrant cultural scene with many supporters of the arts. Leading the way in terms of state institutions is the Art Gallery of Western Australia (AGWA), which houses a collection of more than 17,500 historical, modern, and contemporary artworks. The AGWA was founded in 1895 and occupies a precinct of three heritage buildings on the south-eastern corner of the Perth Cultural Centre. 2019 marks the 40th anniversary of the AGWA's main Gallery.

Near the AGWA is the Perth Institute of Contemporary Arts (PICA)—the state's leading contemporary, non-collecting art space housed in a heritage building in the centre of the city. PICA includes exhibitions and seasons in contemporary dance, theatre, and performance. In terms of the visual art programme, PICA is home to Hatched, an annual exhibition focused on highlighting the best in graduate practice at a national level. It regularly shares touring shows with other institutions of its size in Australia and overseas, and curates in-house too.

Perth, like many cities, has witnessed a changing landscape in terms of commercial and artist-run spaces. A new artist-run space that opened in 2018 is Cool Change Contemporary, which is situated on Barrack Street in a multi-gallery venue located within the historic Bon Marche Arcade building. The initiative hosts a regular programme of exhibitions supported by regular performances, screenings, workshops, and events, and is home to an artist studio Currently operational commercial art galleries in Perth include Moore Contemporary, Gallery 360, Linton & Kay Galleries, and Artitja Fine Art.

The University of Western Australia's gallery is named Lawrence Wilson Art Gallery. The Gallery presents an annual calendar of engaging exhibitions and educational programmes that draw reference to its 80 years of collection history. Another university gallery in Perth is the John Curtin Gallery, operating on behalf of Curtin University's Perth campus.

Artbank has recently opened a Perth arm to their operations; the space can be found operating out of the Hyatt Regency. The Artbank collective is staged in the five-star hotel's expansive first floor in a manner that creates a showroom for the collection for Perth audiences.