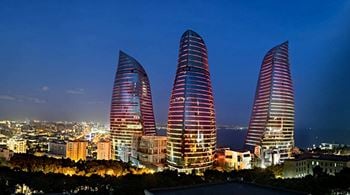 The Azerbaijani capital of Baku is home to a flourishing, culturally diverse art scene. With a rich and at times tumultuous history, the city at the heart of the former Soviet state is home to expanding historical and contemporary collections of Eastern and Western art in new institutions including the Baku Museum of Modern Art and the Heydar Aliyev Center, as well as smaller commercial galleries and non-profit institutions such as the YARAT Contemporary Art Space.

On the western shores of the Caspian Sea, Baku possesses a unique cultural flavour drawn from a historical mosaic of distinct cultures, from the Islamic Shirvan Era (12th–14th centuries) to the Soviet Union (1920–1992). Revealing the city's evolutions, the architecture ranges from the 12th-century walls surrounding the Icheri Sheher (Inner City)—a UNESCO World Heritage site—to uniform Soviet-era buildings and the rapidly growing modern skyline of impressive contemporary skyscrapers, including the three iconic Flame Towers. Showcasing the richness of influences on the city's art and culture is the extensive historical fine art and applied art collection of the Azerbaijan National Art Museum. Similarly, the Azerbaijan Carpet Museum lays out past regional cultural traditions while revealing, through the inclusion of contemporary works, the ongoing diversity that fuels the city's art production.

Coming out of the collapse of Soviet rule uncertain of the future, and subsequently becoming financially prosperous, Baku has become a place to view art treasures as well as a unique range of local, regional, and international contemporary artists. Established in 2009, the Baku Museum of Modern Art boasts an extensive collection of Western modernists including Picasso, Chagall, and Dali, alongside the avantgarde of Azerbaijan. Refurbished cultural institutions like The Museum Centre and Art Gallery and new spaces such as the Zaha Hadid-designed Heydar Aliyev Center play host to exhibitions of contemporary artists from Azerbaijan, neighbouring regions, and across the globe.

Smaller independent galleries like Gazelli Art House and Q Gallery, and not-for-profits such as YARAT Contemporary Art Space further attract international artists while promoting artists from Azerbaijan and the Caucasus on the international art scene. Established in 2011, the non-profit YARAT (translated as 'create') has been particularly active, organizing exhibitions, education events, and festivals, and providing artist residencies. In addition to its own exhibition space in a converted naval industrial warehouse, YARAT runs the YAY Gallery, ARTIM (meaning 'progress'), and, since 2012, the Baku Public Art Festival, which brings the work of Azerbaijani artists to the city streets.

Past Exhibitions In Baku