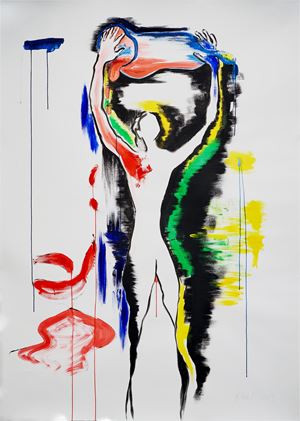 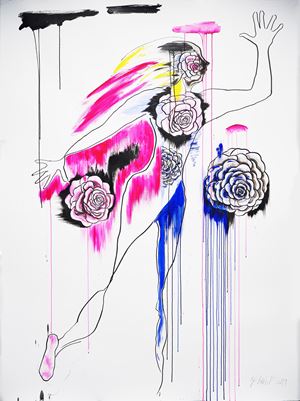 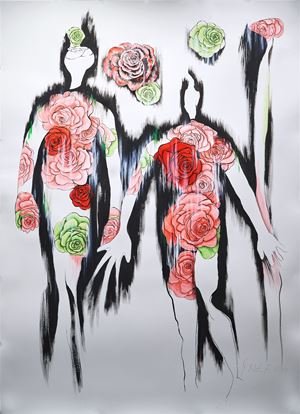 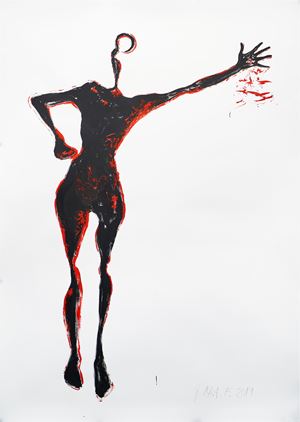 Gazelli Art House Baku presents Jane McAdam Freud's We Are They : Where id was ego shall be, a new body of work inspired by the origins of painting alongside psychoanalytic concepts of the shadow. As the great granddaughter of Sigmund Freud the artist belongs to the Freudian legacy–and psychoanalytic concepts and symbolism have infiltrated her creative life. 'Where id was, ego shall be' is a quote by Sigmund Freud who believed that if we attained dominion over our unthought (unconscious) thoughts, we would access a more evolved, integrated and truer sense of self. McAdam Freud says, 'as women our greatest shadow figures have always been men–the hero, the father, the historian, our keepers. If we learnt to value femininity in both men and women we might be able to confront gender biased rituals.' In her fourth solo exhibition with Gazelli Art House, McAdam Freud builds on her long-standing concern with conceptual binaries, with work that explores notions of what is conscious / unconscious, ego / id, masculine / feminine, nature / culture. The exhibition presents recent drawings that look part outline, part Dali ink drawing, part Rorschach test.

Pliny the elder's Natural History (77–79 AD) tells the story of the origins of painting. Though the Egyptians and the Greeks dispute the original instance both accounts generally agree that painting began with the tracing of a line around cast shadows. Pliny tells the story of the daughter of Butades of Corinth, who while deeply in love with a young man about to depart on a long journey, traced the profile of his face, as thrown upon the wall by the light of the lamp. Jane McAdam Freud reproduces this process drawing a line around her muses, capturing an essence of their being in an abstract portrait. At the private view of the exhibition the artist will perform this technique with volunteer bodies, drawing from immersive theatre practices. McAdam Freud explains, 'I use my muses not to draw from but to draw around. The physical participation of the model is such an intimate encounter it generates powerful 'energy' which seems to inhabit these works.' The primitive linear gestures of the outlines evoke tribal and totemic imagery, referencing the aesthetic realm of Freud's clinical room (with his collection of artefacts) while also hinting at symbolic archetypes that produce cultural habits.

Jane McAdam Freud's hope is to (literally) draw attention to our unconscious beliefs and shadow selves in order to bring to light possibilities and freedoms, especially for the future of women. Society is built on our unconscious prejudices, and McAdam Freud's shadow drawings mimic the outlines of a crime scene, accusing and framing her subjects as implicated in ongoing structural inequality (the series of drawings are in fact titled 'Crime Scenes'). These figurative mugshots point to a collective collusion in the broader culture that enables repetitions of traditional patterns. The shadow portraits reveal an unconscious fault with all of our biases and attempt to provoke a sense of accountability, towards freedom and social equilibrium. 'We are proud to once again exhibit the work of Jane McAdam Freud, who continues to challenge our thoughts on psychodrama, creativity and the role of women in modern life,' says Mila Askarova, Gallery Director.

We Are They : Where id was ego shall be

Sign up to be among the first to know when new exhibitions by Jane McAdam Freud or at Gazelli Art House open.
Sign Up